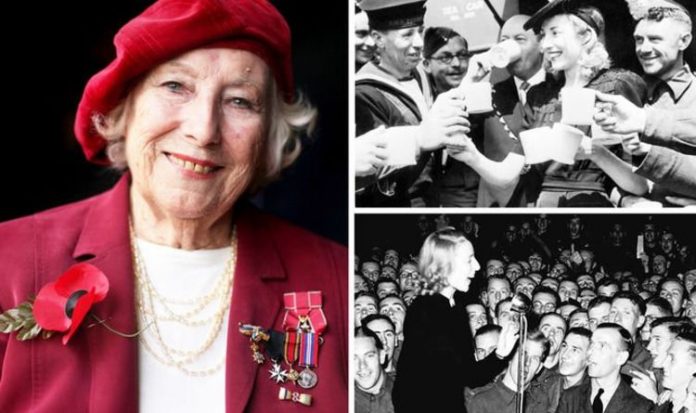 Victory Over Japan Day (VJ Day) will be celebrated on the BBC tonight with a show to commemorate the 75th Anniversary of the official end of the Second World War. Sheridan Smith will croon Dame Vera Lynn’s powerful anthem ‘We’ll Meet Again’ as part of the event. The late singer, who died at the age of 103 in June, made significant contributions during the war. She toured military bases in the UK and abroad to deliver powerful performances. Her voice was said to have imbued courage and strength into soldiers and hope to those back at home. During her tour, Dame Vera visited troops in Burma, Myanmar, later known as “the forgotten army”, and made a number of sacrifices that established her legacy as the “Forces’ Sweetheart”.

Dame Vera had only travelled once before she departed for the jungles where British troops were battling the Japanese in sweltering jungles of Burma.

She was “determined to benefit the troops” who had spent much of the war without musical entertainment, many who had not seen their families for five years.

Conditions were far from easy too, with intense and punishing heat, insects, humidity, monsoons, a lack of facilities and for Dame Vera an increased threat of being kidnapped.

The base was surrounded by “pockets of Japanese” troops, which risked her being captured by enemy patrols in the “highly volatile” warzone.

Before her first performance before hundreds during a “hot, steamy evening”, soldier Frederick Weedman recalled that many of his brigade “were divided in their opinion of her voice”.

Standing on a makeshift stage beside an old piano, Dame Vera’s “strong, clear voice” moved the men as she initially belted out six songs before being demanded to perform multiple encores.

Mr Weedman told the Daily Mail in 2017: “She tried to leave the stage but the men were clapping and cheering.

“She sang three more songs but still they went on cheering. She started to sing again but whenever she tried to stop, they yelled the name of another tune.

“She sang until her make-up was running in dark furrows down her cheeks, until her dress was wet with sweat, until her voice had become a croak – she was the only star we ever saw in the jungle.”

This was far from the only way the singer helped the forces, at each stop on her military tour she spent time in the hospitals and spoke to each soldier.

Dame Vera recalled: “Talking to the boys, giving them the chance to ask me questions and simply being there for them was just as important as the actual singing, if not more so.”

Despite their wounds and struggles, the soldiers would always ask her how things were at home – in a bid to remember the loved ones at home and nation their sacrifices had been made for.

She said: “Because I had travelled around so much in Britain, from Sunderland to Brighton and from Cardiff to Crewe, I’d ask where someone was from and try to tell them about something I had seen in their hometown.

“I let them know that things were all right — that we were holding our heads up and carrying on as usual. There were often tears, occasionally during the concerts but more when I was alone with them.

“They saw me as a link with home and that aroused a lot of emotions — joy at being reminded of that connection, and sorrow because home seemed so far away.

VJ Day 75: The late Dame Vera Lynn was known as the ‘Forces’ Sweetheart’ due to her WW2 contribution (Image: GETTY)

“It was impossible for me to be impassive. I saw the happiness, hope and sadness move across their faces and I felt those emotions, too.”

Dame Vera’s daughter Ginny Lewis-Jones explained that she became a sister-like figure for many in the military and helped them to express the feelings they had to bury deep inside to fight for the nation.

She said: “Ma did understand that she raised the spirits of the men she sang for and gave them hope and joy.

“I believe, she gave them a connection with what Slim called the ‘part of something greater than themselves’ – in particular, the idea of home and everything it meant.”

Ms Lewis-Jones pointed that the singer’s visit to Burma also “coincided with the point at which fortunes shifted”, when soldiers went from “in fear of their lives” to being able to “imagine what a victory… might look like.”

She added: “Of course, I don’t think it is possible for my mother to claim responsibility for the change in the fortunes of the Allies in Burma.

“But she boosted their morale, gave them something to hope for and to fight for.”

General William Slim, who was the head of operations in Bruma, seemed to attest to this theory when he stated: “Morale is a state of mind.

“It is that intangible force which will move a whole group of men to give their last ounce to achieve something without counting the cost to themselves; that makes them feel they are part of something greater than themselves.”

She admitted that having “never really gotten over that period” in her life, which was  “etched in her brain” along with “all sorts of intense memories”.

Dame Vera said: “I met some of the brave men who were fighting that forgotten war again at various reunions after the war and felt connected to them.

“I wasn’t just someone going to sing a few songs – I felt I was one of them. I still do.”

Ms Lewis-Jones believed her mother never truly recovered for her experiences during the war – like many of the soldiers – and this was her greatest sacrifice.

She said: “The experience exhausted her – and I believe the most draining thing of all was also the most thrilling – it was that the men saw her as their salvation.

“She helped them express their emotions, which in the Forces are often necessarily suppressed. She helped them articulate their relationships with sweethearts and families back home.

“She helped them remember England and gave them the hope they might one day return there. That is why she never got over it.”