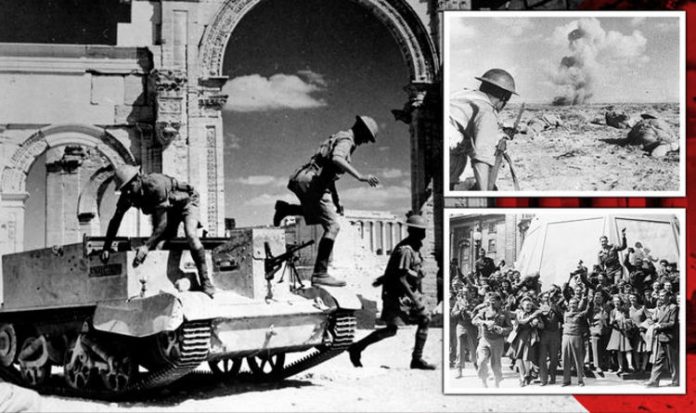 Today, the country will remember the thousands of war veterans who fought in the Far East to bring about the end of World War 2. However, a study has found a staggering number of people did not know VJ stands for ‘Victory in japan’.

Armed Forces charity, SSAFA, asked 2,020 Britons aged over 16 whether they knew what the acronym stands for.

The survey found 46 percent did not know what it meant while only five percent said they would celebrate it every year after learning what the day marked.

More than half (52 percent) of people unaware of the significance of the day admitted they would not feel anything towards the anniversary.

The SSAFA suggested the results show VJ Day heroes are “slowly being erased from British history”.

The war in the Pacific ended in August 1945 (Image: Getty)

The fight with Japan continued for three months after the Victory in Europe (VE) Day in May 1945.

Brutal fighting ended when the Japanese surrendered on August 15.

Due to the war in Europe ending beforehand, many veterans returning home referred to themselves as the “forgotten army”.

Sir Gary Coward, chairman of SSAFA, said: “We should all be aware of our national history, especially when associated with an unrelenting campaign and huge sacrifice. VJ Day marks such an event.

Thousands of prisoners of war during conflict (Image: Getty)

“Many people celebrate Victory in Europe Day, but very few acknowledge or know about Victory over Japan Day.

“Thousands of Allied soldiers, sailors and airmen remained incarcerated in horrendous conditions and their many colleagues continued to fight bitter battles for freedom in the Far East well after VE Day.

“Without their supreme sacrifice, life would be very different to what it is now.

“On this 75th anniversary, we ought to take a moment to reflect on this and try to learn the lessons of this key moment in history.

“The huge losses on all sides must not be forgotten.”

Much like the celebrations on VE Day, this year’s VJ Day commemorations have been changed due to the ongoing coronavirus pandemic.

The Duke of Edinburgh, the Prince of Wales and the Duke of Cambridge are all expected to play roles in the events today.

These include a service of thanksgiving and remembrance, a two-minute silence, and a Red Arrows flypast.

During the war in the Pacific, 50,000 British troops were captured by the Japanese military.

Of this staggering figure, 12,000 died of starvation and disease as many were forced into slave labour camps leaving deep physical and emotional scars.

National hero, Captain Tom Moore – who raised money for the NHS by walking laps for his garden during lockdown – urged people to remember all those people who died during the wars in Europe and the Far East.

Speaking ahead of VE Day earlier this year, the WW2 war veteran warned it was important not to forget the war continued for months after VE Day.

He told Express.co.uk: “We must never forget all those people who died for our freedoms, both in Europe and in the Far East.

“This time 75 years ago many were still fighting so we must never forget them and we must also look to remember VJ Day in August.”

Captain Moore was knighted by Queen Elizabeth last month in a special ceremony.

The war veteran raised more than £32million for NHS charities during the coronavirus pandemic.

He was 99-years-old when he undertook his heroic fundraising efforts.