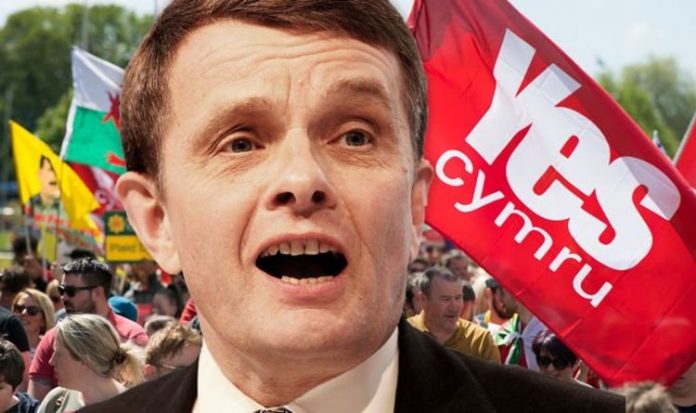 And if it were to go alone and rejoin the European Union, it could expect vastly less help than it currently gets as a member of the United Kingdom, David Jones MP has said. Mr Jones was speaking after Sion Jobbins, chairman of the YesCymru campaign, set out the case for independence, with a YouGov poll of 1,021 Welsh adults published in May suggesting 25 percent back the idea.

However, the MP for Clwyd West, who was Secretary of State for Wales from 2012 to 2014, told Express.co.uk: “The essential thing is this: Wales like every other part of the UK has been helped through this coronavirus pandemic by as a consequence of the fact that it is part of a big, important country with very deep pockets that is able to effectively look after everybody for the last six months and probably for a good while after that.

“Wales would not have that level of resource.

“And even if it were to rejoin the European Union, which is very unlikely because Wales actually voted more enthusiastically to leave than the UK as a whole, they would find that the EU would be nowhere near as generous as the UK Government in terms of looking after people.

“Basically all the EU is doing is making loans which will not start until June of next year anyway and they will be fully repayable.

“The other thing that this Yes Cymru campaign does not recognise is the fact that a lot of Welsh people live very close to the English border.

“In fact, half the population of Wales lives within 25 miles of it.

JUST IN: UK Government in ‘complete denial’ after scrapping of Galileo rival

“A huge number of them cross the border every day and don’t even recognise it.

“They go there to work, they gain their livelihoods from it and that would disappear if Wales was independent.

“I think there has always been this minority of people who for whatever reason would rather Wales were not a member of the United Kingdom.

“But that does not represent the view of the majority by any means.”

Speaking last month, Mr Jobbins told Express.co.uk: “At the moment we are building a movement for independence and making the case.

“The arguments for independence have never really been made in Wales, not even by Plaid Cymru, until very recently.

“Wales is well equipped to be independent.

“Our GDP per capita is higher than Spain or Portugal, our tax revenue per head is high than New Zealand’s, we have 15 percent of the whole of Europe’s tidal power, we already export twice as much electricity as we use and, are in fact, the world’s 6th biggest electricity exporter, we also have excellent brands in food and meats, a strong tourism sector and six universities where most of the students come in from outside Wales.”

He also pointed to the fact that Wales had its own national football and rugby teams, adding: “Wales is better and more ready to be independent than the vast majority of countries who’ve ever become independent since the World War 2.”

Mr Jobbins also insisted Brexit would not be a factor.

He explained: “We believe by the time the issue of independence becomes something to vote on in Wales, Brexit will be a side issue and won’t play a big part.

“The question of rejoining the EU or seeking an economic relationship like that with EFTA would be options do take after independence, though – we’d follow closely the situation in Scotland.

“Many of the pro Brexit arguments are true for Wales – unelected politicians passing laws on Welsh life (House of Lords), money Wales pays in taxes is then spent in Wales under the guise of being some kind of gift, taxpayers in Wales subsidising London’s infrastructure, the colossal waste of HS2 and also Trident.

“Brexiteers also continued to celebrate the success of small independent countries like Singapore, Switzerland, Norway, Iceland or even the bravery of Ireland declaring independence.

“So, we’re already seeing people translating those sentiments to Wales being a small independent country.”