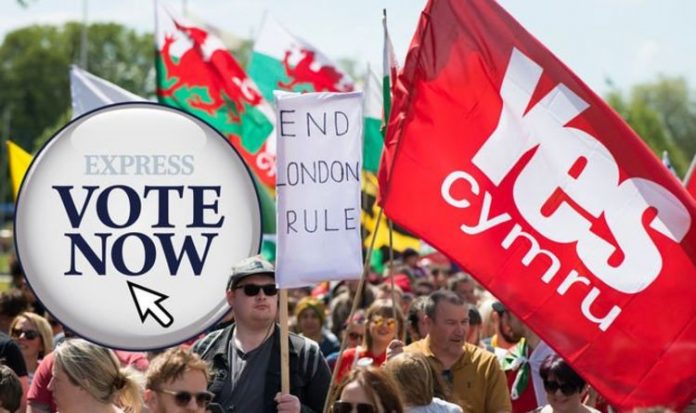 The issue of the ties which bind the United Kingdom together are very much in the spotlight at the moment, with Boris Johnson claiming his controversial Internal Market Bill is necessary to protect the integrity of the United Kingdom. North of the border, Nicola Sturgeon’s push for a second referendum appears to be pick up pace.

However, to the west, YesCymru is also pushing a similar agenda – with campaign chairman Sion Jobbins keen to go beyond what he sees as the overly cautious approach of Plaid Cymru.

A poll published in May suggested 25 percent back the idea, up four percent on a similar survey in January.

He said: “Our GDP per capita is higher than Spain or Portugal, our tax revenue per head is high than New Zealand’s, we have 15 percent of the whole of Europe’s tidal power, we already export twice as much electricity as we use and, are in fact, the world’s 6th biggest electricity exporter, we also have excellent brands in food and meats, a strong tourism sector and 6 universities where most of the students come in from outside Wales.

“We’re recognised as an independent country in many sports – football and rugby being most obvious (where we’re totally self-financing and doing well), have some international consulates here already like Ireland and we have a strong country brand.

“Wales is better and more ready to be independent than the vast majority of countries who’ve ever become independent since the War.”

Others are less convinced. Daniel Kawczynski, whose Shrewsbury and Atcham constituency borders Wales, concerned at the threat devolution poses to his constituents, and the the UK as a whole.

Speaking in June, he told Express.co.uk: “These aren’t concerns I’ve ever seen mentioned in grand papers about the future of the constitution.

“But they are real, and are chipping away at the foundations of our Union.”

Pointing to low turnout for elections to the Welsh assembly, Mr Kawczynski argued it was time for referendum on its very existence.

He said: “It has been more than two decades since the 1997 vote on creating Welsh Assembly.

“That’s longer than the gap between that and the 1979 referendum, whose decisive majority against devolution it overturned.

“It’s time to weigh 20 years’ worth of evidence and experience, and think again.

“The fate of the United Kingdom may depend on it.”