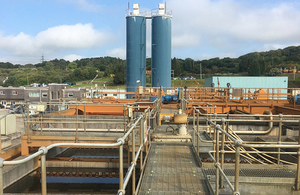 The Wheal Jane treatment scheme in Cornwall pumps water from an abandoned metal mine to stop uncontrolled surface discharges and remove contaminants such as arsenic, cadmium, copper, iron, lead, manganese, mercury and zinc.

The scheme is now part of the Water and Abandoned Metal Mines (WAMM) programme, funded by the Department for Environment, Food and Rural Affairs and delivered by the Coal Authority in partnership with the Environment Agency (EA), to make our rivers cleaner and healthier to benefit people, wildlife and the economy.

Wheal Jane metal mine in Cornwall was worked, mainly for tin, from the mid-18th century and when it closed for the final time, in March 1991, the pumps which kept it dry were switched off.

The mine workings filled up with water and in November 1991 this started to discharge from the Jane Adit.

This historical drainage tunnel was quickly plugged and limited pumping took place for 2 months with the mine water being stored in the Clemows Valley tailings dam, a facility originally formed using waste from the former tin mining operation.

Pumping stopped on 4 January 1992 because the water draining from the tailings dam was too contaminated.

On 13 January 1992, a blockage in the Nangiles Adit suddenly failed, which caused an outbreak of 50 million litres of metal laden, acidic mine water over a 24 hour period.

Emergency pumping and treatment was immediately put in place by the National Rivers Authority (now the EA), with funds from central government, to prevent further pollution.

In 1994, a multidisciplinary team of scientists from universities, the National Rivers Authority and the mining industry used government funding to build a large pilot treatment plant to treat about 2% of the Wheal Jane mine water flow.

A series of shallow lined lagoons were used to evaluate different “passive” technologies, which established biological, geochemical and physical processes were effective at removing many key toxic metals like cadmium, copper and aluminium.

However, these passive systems require much more land than traditional chemical dosing – or “active” – systems and so would not be feasible for the very high flows that have to be pumped from the Wheal Jane mine to control water levels (which average 330 litres per second).

How the active treatment process works

In 2000, a new active scheme was commissioned to improve management of the mine water and sludge, which continues to operate today.

Up to 660 litres per second of mine water is pumped from the historical workings to the pre-reaction chambers, where it is mixed with sludge recirculated from a later stage in the treatment process to aid the formation of high-density particles.

This then gravitates to the reaction chambers, where compressed air is introduced and it is dosed with lime slurry to create the required conditions for chemical reaction and metals precipitation.

Treated mine water gravitates to the lamella clarifiers – a type of “settler” designed to remove particulates from liquid – and sludge is returned to the pre-reaction chambers.

Treated mine water is discharged into the adjacent watercourse, which then flows down to the Carnon River.

Effluent is continuously monitored for pH (a measure of acidity or alkalinity) and suspended solids – any “out of spec” effluent is automatically diverted to the Clemows Valley tailings dam.

READ  NEW Brexit plan REVEALED: And if the EU rejects it THEY will pay the price | Politics | News - UK

Surplus sludge is discharged to the sludge tank, from where it is pumped to the Clemows Valley tailings dam, a 114 acre raised mine waste containment site, where it settles, dries and solidifies.

Any water draining from the dam is returned to the treatment plant.

The future of the Carnon River

Although the Wheal Jane mine water treatment scheme is very effective, the Carnon River is still the most metal polluted river in England.

Monitoring by the EA shows that two key sources need to be treated to return the river to a healthy ecological condition. These are:

The EA and Coal Authority are investigating potential remedial options to manage pollution from both these sources.