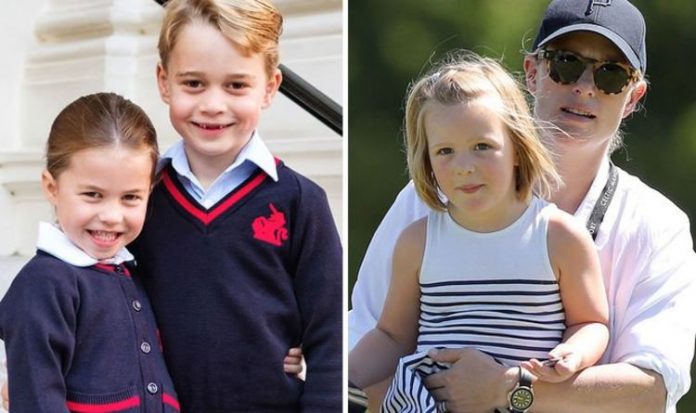 Zara Tindall, 39, is expecting her third child with husband Mike Tindall in 2021. Mike revealed the happy news on Wednesday during an episode of his rugby podcast and shared his excitement at becoming a father again. While Zara and Mike are much-treasured members of the Royal Family they are not working royals and are less bound by protocol than more senior members of the Firm.

Zara is Queen Elizabeth II, 94, and Prince Philip’s, 99, eldest granddaughter and is a much-loved member of the Windsor clan.

But unlike their royal cousins Prince Harry, 36, and Prince William, 38, Zara and her brother Peter were raised outside the royal bubble.

Zara’s mother Princess Anne, 70, rejected the Queen’s offer of royal titles for her children choosing to raise them as private citizens instead.

Princess Anne was never considered an heir to the throne as her position in the line of succession was behind her three brothers Prince Charles, 72, Prince Andrew, 60, and Prince Edward, 56.

This meant Anne’s offspring were never destined to be senior royals and by choosing not to give them royal titles she allowed them more freedom.

Zara and Mike already have two daughters – Mia, six, and Lena, two, neither of whom have official titles.

The daughters also go by their father Mike Tindall’s surname rather than the Mountbatten-Windsor last name used by Meghan Markle and Prince Harry’s son Archie Harrison.

He added: “As the great-grandson of the sovereign, he, like Prince Charles before him, would have been born without royal style or title under George V’s Warrant of 1917.

“Just as her father had done it took the Queen issuing Letters Patent to remedy the situation.”

Unlike their second cousins Prince George, Princess Charlotte and Prince Louis, Zara’s children are low down the line of succession and are not expected to reign.

Prince George is third in line to the throne after his father Prince William and is one day expected to be king.

Therefore it was important that Queen changed the law to allow him a title so that he was not “born a commoner.”

Mia and Lena Tindall are currently 19th and 20th in line to the throne.

They will shift down a spot following the birth of Princess Eugenie’s royal baby early next year.

Their younger sibling is expected to be born next spring and is most likely to be 22nd in line to the throne.