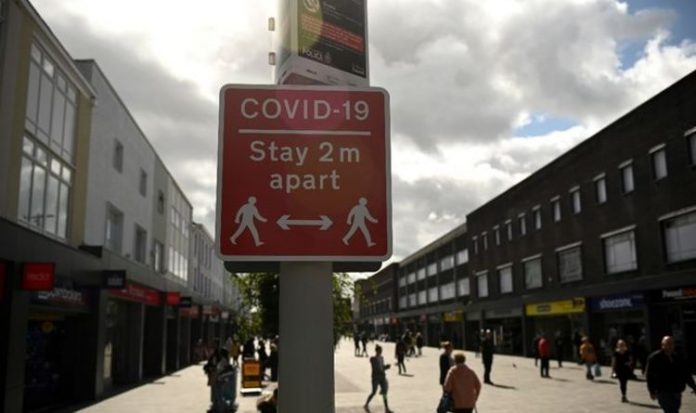 Prime Minister Boris Johnson has repeatedly said he does not want to put the UK into a second lockdown following the economic repercussions of the first lockdown, which began in March this year. Each of the devolved nations has diverged significantly from central Government’s advice and have carved individual paths through the crisis.

But as the Welsh Government puts all of Wales under a circuit breaker lockdown, it becomes clear that the prospect of another lockdown could be looming for the UK’s other nations.

Two areas of England are currently under Tier 3 restrictions, the harshest currently in place – but even these do not amount to a full lockdown, with schools still open and hospitality venues limited but still able to serve customers.

The UK’s R number – the number of people each coronavirus case infects – has increased from between 1.2 and 1.5 the previous week to between 1.3 and 1.5 in the most recent week, according to official figures.

The most recent daily increase, recorded on Sunday, October 18, records more than 16,000 new cases across the UK in a single day.

However, the UK’s chief scientific adviser and chief medical officer have both advised repeatedly for a lockdown of some kind to halt further spread.

Professor Chris Whitty said this week that he did not think the “baseline” Tier 3 measures would be enough to stop the rising number of infections.

In another instance, he also insisted a “substantial majority” of the public backed firm measures, including lockdowns, to respond to threats to public health.

He said: “Consistently, populations around the world, going back right into history, but up to the current time where we’re going through the most major pandemic for many decades, have consistently wanted – indeed demanded – that their state acts to help protect them from the pandemic.

DON’T MISS
UK covid cases MAPPED: Wales and Scotland vs England [MAPS]
What do I do if I’ve been exposed to someone with covid? [EXPLAINER]
How long is self isolation? [INSIGHT]

“If you think about support for this in the UK now, the lockdown measures that happened in the UK earlier this year – which were some of the most significant curbs to freedoms the state has actually introduced for many decades – were supported overwhelmingly in all the polling that was conducted.

“Over 90 per cent support for these really quite strong measures by the state.

“And indeed in late 2020, quite a lot later, the public still remain by a substantial majority in favour of ongoing measures – all ages, all social groups and all political persuasions. This is across the board.”

As it currently stands, the general rules across England are:

• Office workers who can work from home should do so
• Pubs, bars and restaurants in England must close by 10pm each night
• The hospitality sector must use only table service only
• Face coverings must be worn in shops, on public transport, in taxis and private hire vehicles, and by retail staff while at work. Masks must also be worn when a customer in a hospitality venue is not seated at a table to eat or drink indoors
• The exemptions to the rule of six will be reduced, banning indoor team sport – such as indoor five-a-side football matches
• The planned return of spectators to sports venues will now not go ahead from October
• Wedding ceremonies and receptions are capped at 15 people