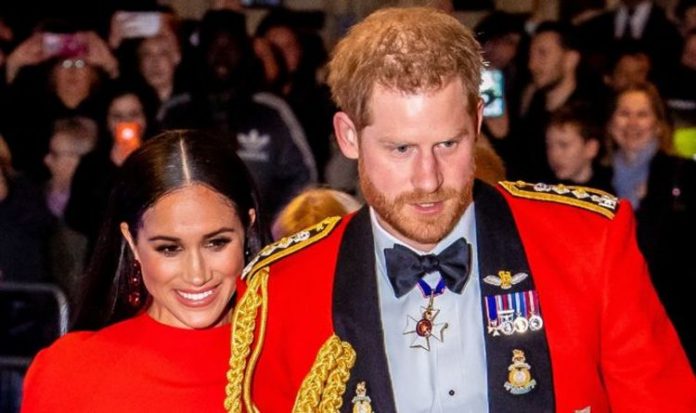 Prince Harry and Meghan Markle left behind their royal lives this time last year as they embarked on a new venture in America away from the royal bubble. The couple have had a lucrative year, pulling in various deals with the likes of Netflix and starting their own podcast, Archewell audio.

The pair announced they were stepping back from their royal duties in January 2020.

They reached an agreement with Queen that their role outside of the family would be reviewed in a years time, and the time has finally come for them to meet again to discuss arrangements.

When the couple announced they were stepping down, the Queen said in a statement: “Harry, Meghan and Archie will always be much loved members of my family.

“I recognise the challenges they have experienced as a result of intense scrutiny over the last two years and support their wish for a more independent life.

“I want to thank them for all their dedicated work across this country, the Commonwealth and beyond, and am particularly proud of how Meghan has so quickly become one of the family.

“It is my whole family’s hope that today’s agreement allows them to start building a happy and peaceful new life.

The couple walked away from discussions last year with their Duke and Duchess titles intact but chose not to retain their HRH titles.

They also stopped receiving public money and were barred from formally representing the Queen.

“I’d be very surprised if the Queen were to issue a letter patent to remove their titles.

“What I can see is a recommendation that they don’t use Duke and Duchess of Sussex in their career.”

When Prince Harry’s mother, Princess Diana, divorced Prince Charles, she lost her HRH title but maintained the right to be known as Princess Diana.

The move was seen as punitive and unfair by the public at the time, making it unlikely that the Queen would make a similar move with her grandson.