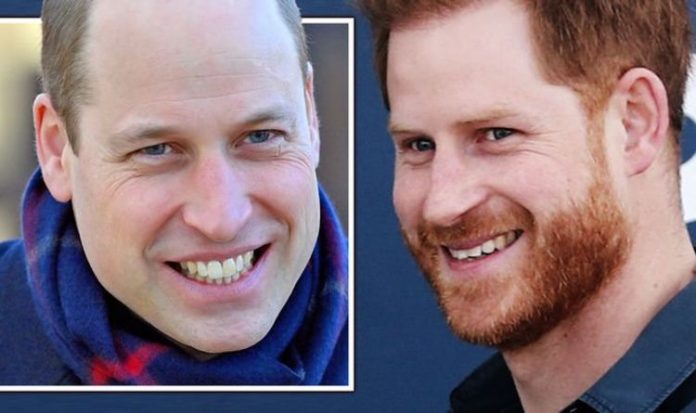 While Prince William has continued with his royal duties, his younger brother has pursued the celebrity lifestyle in America, signing various lucrative media deals alongside his wife, Meghan Markle. The brothers, who were previously frequently spotted together, were last seen in the Duke and Duchess of Sussex’s last royal engagement at the Commonwealth Day service at Westminster Abbey in March 2020.

Prince Harry famously confirmed that he and his elder brother were “on different paths” in an interview with ITV’s Tom Bradby in late 2019.

Months later he and his wife Meghan made the shocking admission that they were to step down from their royal duties.

The couple reportedly dropped the bombshell without informing the rest of the Royal Family, leaving the firm reeling from the news.

The couple subsequently moved to California, where Meghan is from, with their son Archie, who will turn two this year.

The brothers have pursued very different paths over the last year, and Prince Harry has not returned to the UK since.

Royal insider Kate Nicholls has revealed the brothers may have kissed and made up over the Christmas period – albeit virtually.

She said: “There were phone and video calls over the Christmas and New Year holiday and the Sussexes sent presents to the Cambridges and vice versa,” Nicholl said.

“It was an opportunity in an otherwise very busy and chaotic year for both of the families to come together and connect, albeit virtually.”

Another royal source told US magazine the brothers apparently plan to reunite in 2021.

It is likely the Duke and possibly the Duchess of Sussex will return to the UK for Prince Philip’s 100th birthday, and also for the unveiling of a statue to mark what would have been Princess Diana’s 60th birthday.

The insider said William and Harry “are looking forward to spending time together in person the moment it’s safe to travel.

“At some point in 2021, the Cambridges will travel to Santa Barbara and see the Sussexes on their new home turf.”

2020 was a difficult year for the Royal Family – Meghan and Harry’s exit from the firm was mild in comparison to the fallout from Prince Andrew’s relationship with paedophile Jeffrey Epstein.

Meghan and Harry suffered personal heartbreak when Meghan sadly suffered a miscarriage in July, going public with the news later in the year.

The coronavirus plans shelved almost all of the royal events planned for the year, including investitures and Trooping the Colour.

However, the family has plenty to look forward to in 2021, with a number of milestones on the way, including two new additions from Princess Eugenie and Zara Tindall.

Express.co.uk has contacted Harry and Meghan’s representatives for comment.