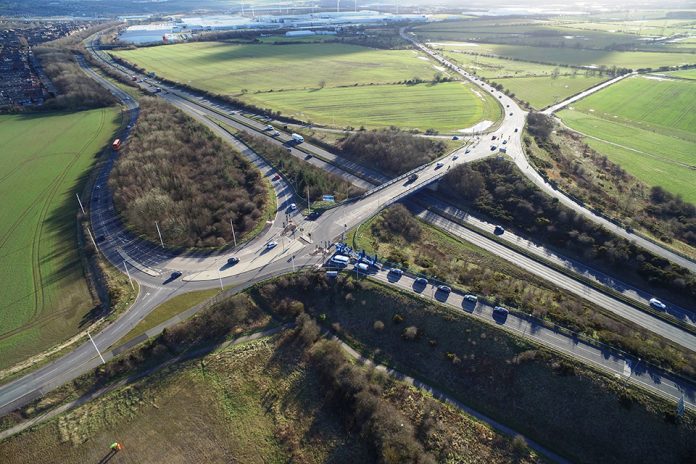 The A19 is set to benefit from £51 million worth of upgrades that have begun 6 months ahead of schedule, underlining again the government’s commitment to quickly levelling up Northern transport infrastructure, Transport Minister Baroness Vere announced today (8 October 2020).

The multi-million-pound improvement scheme at the Downhill Lane site, led by Highways England, will significantly improve journeys through the busy junction. In particular, commuters will benefit from reduced journey times and less congestion, including for the thousands of people working at the nearby Nissan factory.

The above image shows what the Downhill Lane junction will look like after the upgrade.

Alongside today’s announcement, Baroness Vere will also virtually chair the latest round of discussions with local members of the Northern Transport Acceleration Council (NTAC), including North of Tyne Mayor Jamie Driscoll and Chair of the North East Joint Transport Committee Cllr Martin Gannon.

As well as discussing the numerous benefits today’s A19 upgrade works will bring to the region, the council will discuss various other local transport projects that are a priority for Northern leaders.

The Department for Transport launched the NTAC earlier this year, to give Northern leaders a direct line to ministers to accelerate transport projects.

I am delighted work has started early on this important road upgrade for the North East; it’s another example of our commitment to levelling up Northern transport infrastructure and to bringing projects forward where we can.

It’s also the sort of accelerated works we want to achieve through NTAC in the future, to help us build back better and create more reliable, more connected and better quality transport options.

By bringing forward the start of this multi-million-pound scheme, communities in the North East will benefit from the economic growth, jobs and homes that large engineering projects of this kind create.

The A19 scheme is the latest example of Department for Transport investment in the region, following the completion of the new Nexus Metro Satellite Depot. The depot, completed this month, is a key milestone in the Metro’s Fleet Replacement Programme, possible thanks to over £330 million funding from the department.

NTAC is part of the government’s wider efforts to use infrastructure investment as a way to lead economic recovery following coronavirus and to improve people’s access to opportunity and quality of life in the North.