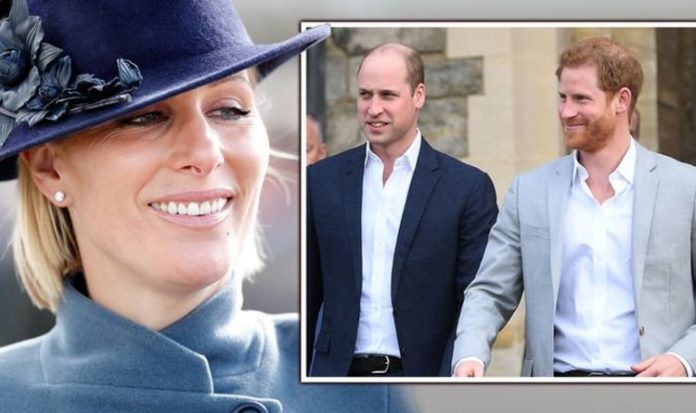 Royal commentators Katie Nicholl and Victoria Arbiter discussed Zara Tindall’s relationship with Richard Johnson during Channel 5’s documentary ‘Zara and Anne: Like Mother Like Daughter’. Ms Arbiter said Zara’s decision to live with Mr Johnson before they were married set a precedent for other royals in the younger generation of the monarchy.

Ms Nicholl said: “I think Zara is much very like her mother as in she is a free spirit.

“She has had some quite colourful boyfriends in the past.

“I suppose her biggest romance was with fellow jockey Richard Johnson.

“This was quite a tempestuous, fiery relationship.”

READ MORE: Prince Harry shamed for Netflix deal after they ‘trashed his family’

The royal commentator continued: “Zara had a bit of a reputation for being a royal rebel and doing things differently, not caring about what anyone thought of what she did.

“You would often see pictures of them out kissing, pictures that fuelled that reputation for Zara of being a bit of a wild royal.”

Ms Arbiter added: “Zara was one of the first younger members of the Royal Family to be able to live with their significant other without being married.”

Judi James, a body language expert, previously told Express.co.uk that Zara Tindall and her mother Princess Anne both appear to be “intense sharers”.

Ms James gave further insight into the relationship between the mother and daughter.

She said: “Zara always talks about her mother with a sense of awe as well as humour and affection, but it’s clear that Anne is proud of the daughter who has led the kind of life that Anne herself might have seen as ideal had she not taken on all her royal duties.”

Ms James added: “Princess Anne has never been a lover of the PDA, posing in a more traditional, hands-off way with two husbands and her own children.

“But the way that daughter Zara has emerged as a wonderfully tactile and openly affectionate woman suggests there might have been a very different version of her mother away from the cameras.”