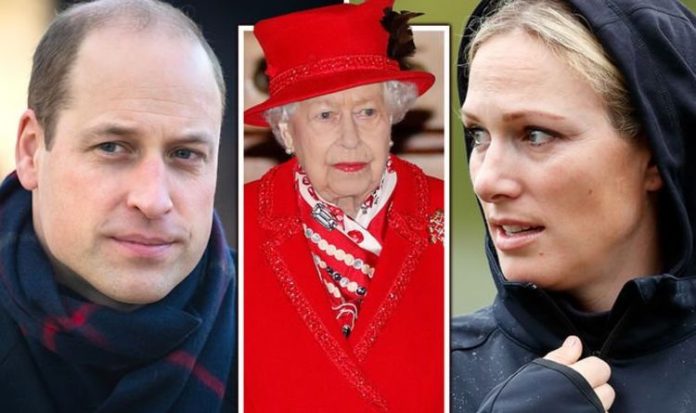 Zara Tindall, 39, is Queen Elizabeth II’s granddaughter, and while she was born before her cousin Prince William, 38, she is far behind him in the line of succession. The Queen and Prince Philip, 99, have eight grandchildren and eight great-grandchildren with two more on the way. However, customs and laws surrounding royal titles means there is a stark divide between younger Royal Family members.

Why do some of the Queen’s grandchildren have titles but others don’t?

Prince William is the eldest son of heir apparent Prince Charles and is second in line to the British throne.

William was born with an HRH style and was given his Duke of Cambridge title by the Queen upon his marriage to Kate, Duchess of Cambridge.

As William is heir to the British throne he was destined to have an official title as were any of his offspring.

William and Kate’s eldest son Prince George, seven, is third in line to the throne and is also expected to wear the crown one day.

As a man William is also able to pass on his royal titles to his children following his death, something female royals are prevented from doing by law.

Princess Anne is one of the key reasons Zara Tindall has very different royal standing to her younger cousins Prince William and Prince Harry.

Following the birth of her two children Peter Phillips, 42, and Zara, Princess Anne’s rejected the Queen’s offer of titles for them, choosing to raise them as private citizens instead.

“As a rule titles do not pass through the female line as royal women are considered to have married out at the time of their marriage.”

Mr MacMarthanne explained royal titles are only passed down the male line of the Firm.

He added: “In contrast, titles are passed through the male line in accordance with George V’s Warrant of 1917, and thereafter the terms of creation of any peerage.

“As a result of these rules, the Queen has grandchildren who have both royal titles and none at all, Princess Anne’s children, Peter and Zara, being an example of the latter.”

Mr Macmarthanne explained while William can pass on any royal titles, Zara would be unable to do so.

The expert added: “Consequently, whilst Zara’s cousins in the male line, such as the Duke of Cambridge can pass on another to his children neither Peter or Zara can.

“In any event even if Princess Anne had accepted a title for her husband by the time of Zara’s children’s birth, Zara as a woman, would not have been in a position to pass a further title to her own children.

“Invariably, women are unable to pass on titles or inherit then, unless under retainer in the peerage’s creation, and examples of this are exceptional.

“Additionally, precedents set in recent decades with royal princesses marrying men without titles has consolidated the practice of children of these marriages being considered private individuals without title, despite their royal antecedents.”