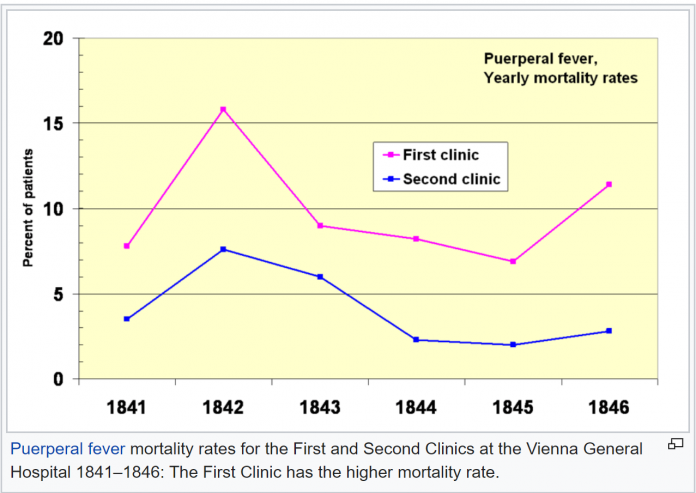 It was 1847. Ignaz Semmelweis had a problem. As the Chief Resident at the Vienna General Hospital, he was responsible for the contrasting death rates in the two maternity clinics under the hospital. Some information the two clinics:

The problem was apparent to him and the public. People were begging to be admitted to the second clinic. The first clinic was considered a death trap. Women preferred street birth to the first clinic!

He needed to find the cause quickly. What could be driving this drastic divergence in the death rates? Any difference in patient demographics, external factors or treatment procedures? His enquiries revealed that there were no material differences in any of these factors.

Having ruled out the above suspects, the cause now zeroed down to the medical professionals who were treating these patients. First clinic had medical students and the second one had midwives. If anything, the outcome should be reversed. But there seemed to be no visible difference in the procedure of the treatment. This kept gnawing at him until……

He found the exception. The medical students were performing autopsies on cadavers and then performing operations. The germs of the cadavers were getting transported to the patients of the maternity clinics.

Ignaz then instituted a clinic-wide standard policy of washing hands with a chlorinated solution between different procedures. And voila, the death rates started going down. The death rates in the first clinic were comparable to the second clinic within a month and were down to zero in both clinics in the next few months.

This is one of my favourite analytical use cases. It goes through the complete data science project cycle starting with a business problem to data collection to exploratory data analysis to hypothesis generation and related analysis to experimental design and monitoring of the solution. There was cross-referencing of the data to the other clinic (benchmarking). No bias in the analysis. Fortunately, it was not the clinic with the midwives that had a higher death rate! Else the bias of medical students being better trained than midwives could have entered in.

Rather than applying powerful algorithms, fancy tools and techniques (or in this case better scalpels and forceps), it was the inherent fundamental curiosity and iterative analytical rigour that was successful in identifying the root cause and providing a simple solution.

All said, washing hands seemed to be the flavour du jour even in 1847!