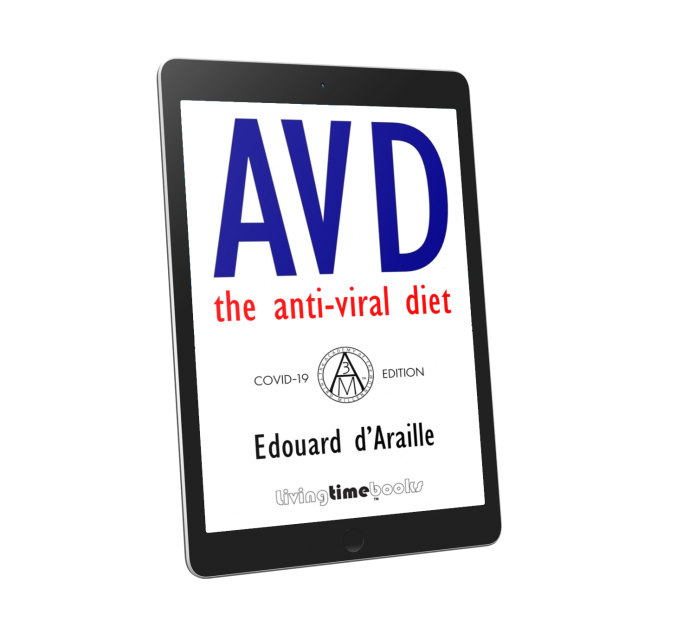 Anglo-French academic author Edouard d’Araille releases new book AVD: The Anti-Viral Diet, based on the work of over 1000 scientific researchers into the anti-viral and immune-enhancing properties of more than 50 dietary ingredients. AVD sets forth evidence from hundreds of scientific studies confirming the majority of these ingredients may be potential prevention against – or treatments for – SARS-CoV-2 and COVID-19.

– AVD is based upon the past fifty years of research in nutritional science, microbiology, phytochemistry, virology, infectious diseases, dietetics etc. A convincing body of evidence appears to have emerged of the anti-viral qualities of numerous elements in our diets.

– Edouard d’Araille has stated that: “I truly believe that millions of lives could be saved from viral illnesses if we learn to incorporate anti-viral ingredients into our diet – ingredients having the corroboration of scientific evidence and not based on mere rumour or opinion”.

– AVD advances in three stages which progressively introduce the idea of an ‘Anti-Viral Diet’.

In Part 1 the author defines this as: “a diet whose primary purpose is to counteract viral threats and to maximize the ability of our immune systems to fight off both viruses and viral diseases”. The impact of Coronaviruses on us is considered – above all SARS-CoV-2 – plus scientific evidence in favour of investigating the potential of anti-viral dietary ingredients.

READ  Want Hair: One-Stop Destination for Your Hair Transplant Needs in the UK

– Part 2 explores the anti-viral and/or immunomodulatory properties of fifty-two natural ingredients – found in or as food – in each case indicating which viruses they have been shown to act against or how the immune system can be enhanced by them. SARS-CoV-2, Influenza viruses, HIV, Ebola, Yellow Fever, Dengue and Zika are just some of those included.

– Finally, Part 3 sets forth the outline of a preliminary ‘Anti-Viral Diet’, which shows how to incorporate some of the ingredients from Part 2 into one’s daily dietary intake. – AVD is based on the research of over 1000 scientists and each section is web-linked with online resources that present studies, reviews and trials in support of the anti-viral ingredients.

– Two editions of AVD are available. The ‘COVID-19 Edition’ focuses on identifying dietary ingredients that may be effective against SARS-CoV-2 and COVID-19, while the ‘ACADEMY Edition’ incorporates 200 pages of extra scientific research data. ‘The Science Behind AVD’ – which explains the molecular mechanisms of anti-viral ingredients – is out November 2020. – 10% of all profits from both editions of AVD are being donated toward anti-viral research.