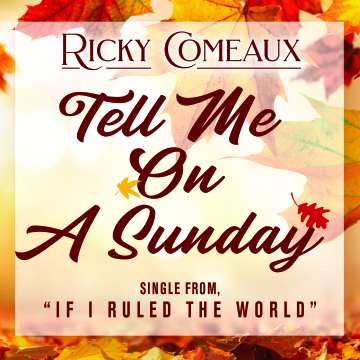 The Houston, Tx native closes out 2020 with the single and accompanying lyric video from his 11 track self-released album “If I Ruled The World” featuring songs from Standards to Broadway.

HOUSTON – Nov. 20, 2020 — Ricky Comeaux continues his nod to classic Broadway in the single  “Tell Me On A Sunday” from If I Ruled the World, Ricky’s solo debut album showcasing his vocal range and innate ability to interpret classic songs with a unique perspective.

“This is the title track to Andrew Lloyd-Webber’s one woman show from the 80’s, less known than his most famous musicals of the era, but still great. The show was called Song and Dance, with Bernadette Peters singing this tune. I got my hands on it and immediately incorporated it into the act.”

If I Ruled the World features dynamic, alternately subtle, soulful and explosive interpretations of 11 classic rock, pop, Broadway and film songs with music tracks produced in Los Angeles by veteran film and television composer and Founder of Musicomm Mark Holden, and vocals produced at Houston’s Wire Road studios by Barry Coffing (Randy Travis, Michael McDonald, Cyndi Lauper), If I Ruled The World has a universal appeal that taps into that sweet spot in the pop marketplace where greats like Josh Groban, Andrea Bocelli, Sarah Brightman and Il Divo currently reign.

Along with Andrew Lloyd-Webber’s “Tell Me On A Sunday,” The set includes previous singles “Theme from Kiss of the Spiderwoman,” “I, Don Quixote,” Leonard Cohen’s “Hallelujah,”,” Roy Orbison’s “It’s Over,” “I’ve Gotta Be Me” from “Golden Rainbow,” Sondheim’s “Not While I’m Around,” “Carolina in the Morning,” “If I Ruled The World,” David Gates’ “If,” and “Since I Fell For You,” originated by Lenny Welch and later re-popularized by Al Jarreau.

“Tell Me On A Sunday” is available on all digital platforms including Apple Music, iTunes, Spotify, YouTube Music, and Amazon Music.

Back in the roaring 80’s and 90s, when Ricky Comeaux was cementing his legend in Houston’s musical and social circles doing thousands of gigs as the powerhouse vocal half of beloved duo Atwood and Comeaux, his vocal teacher gave him some sage advice. “Sing to the light, to the world and universe,” Bettye Gardner told him. “Put your passion out there with no preconceptions except for the beauty of what you’re doing.”

Two decades after his initial split with multi-instrumentalist and longtime creative partner Jerry Atwood, having survived detour after emotional and physical detour which took him far from the magical world he’s always loved the most, the dramatic tenor is taking Bettye’s words to heart.