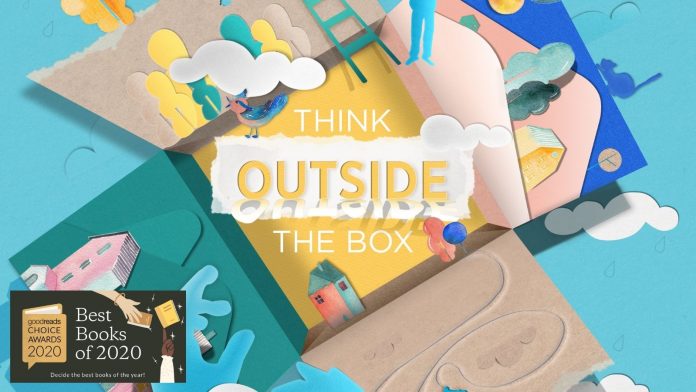 London, England – November 2, 2020 – Goodreads Choice Awards (an Amazon company) is pleased to announce Justine Avery as a nomination in the 2020 Goodreads Choice Awards for her book Think Outside the Box in the Best Picture Book Category. The nomination is an extremely rare feat for a non-traditionally published author, joining the household names of Brandon Sanderson (Starsight), Suzanne Collins (The Hunger Games) and Stephanie Meyer (Twilight).

Nominations are carefully considered from Goodreads editors who select the books for each category, limited at a strict 15 titles. The books that receive the highest amount of reader votes between now and November 8 will continue to the next round. The semifinal round runs November 10-November 15, the final round November 17-November 30 and the winners announced December 8, 2020.

Her enchanting book, “Think Outside the Box” encourages children to think creatively is nominated in the category for Best Picture Books. The author’s creative and fun writing style captures children’s imagination. Combined with the watercolor style drawings from illustrator Liuba Syrotiuk, it is easy to see why “Think Outside the Box” is receiving positive attention. The book also has a positive message that helps kids grow into thoughtful and creative adults.

Justine Avery is known for being “A master of grabbing the reader and pulling them into the story. … Her writing is off-the-wall … and always, ALWAYS spellbinding.” –The Wishing Shelf Independent Book Awards UK.

Justine Avery is an award-winning author of stories large and small for all. Born in the American Midwest and raised all over the world, she is inherently an explorer, duly fascinated by everything around her and excitedly noting the stories that abound all around. As an avid reader of all genres, she weaves her own stories among them all. She has a predilection for writing speculative fiction and story twists and surprises she can’t even predict herself.

Avery has either lived in or explored all 50 states of the union, over 36 countries, and all but one continent; she lost count after moving 30-some times before the age of 20. She’s intentionally jumped out of airplanes and off the highest bungee jump in New Zealand, scuba dived unintentionally with sharks, designed websites, intranets, and technical manuals, bartered with indigenous Panamanians, welded automobile frames, observed at the Bujinkan Hombu Dojo in Noba, Japan, and masterminded prosperous internet businesses—to name a few adventures. She earned a Bachelor of Arts degree that life has never required, and at age 28, she sold everything she owned and quit corporate life—and her final “job”—to freelance and travel the world as she always dreamed of. And she’s never looked back.

Aside from her native English, Avery speaks a bit of Japanese and a bit more Spanish, her accent is an ever-evolving mixture of Midwestern American with notes of the Deep South and indiscriminate British vocabulary and rhythm, and she says “eh”—like the Kiwis, not the Canadians. She currently lives between Los Angeles and London with her husband, British film director Devon Avery, and their children. She writes from wherever her curiosity takes her.

Avery loves to connect with fellow readers and creatives, explorers and imaginers, and cordially invites you to say “hello”—or konnichiwa.