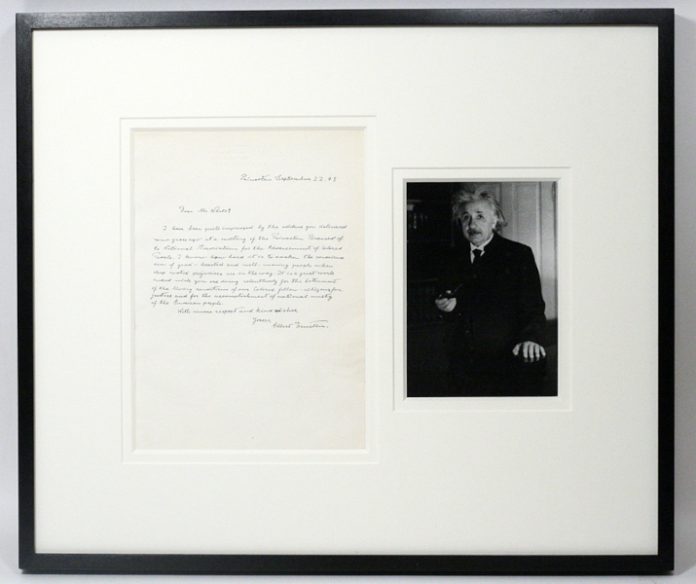 Letter Written by Albert Einstein in 1943, in English, Condemning Racism and Segregation in the U.S., is for Sale

New York City, NY, USA, September 29, 2020 — A letter handwritten in English in 1943 by Albert Einstein – in which he strongly condemns racism and segregation in the United States – is for sale through The Manhattan Rare Book Company at a fixed price of $85,000. The letter is especially relevant now, in today’s racially and politically charged climate, even though it was written nearly 80 years ago.

Dated September 22nd, 1943 and handwritten on his embossed Mercer Street, Princeton (N.J.) stationery, the letter is addressed to Walter F. White, the influential African American Civil Rights leader who led the National Association for the Advancement of Colored People (the NAACP) from 1929-1955. Einstein praises White for his work battling racism and prejudice.

Writing in a neat cursive hand, Einstein begins, “Dear Mr. White, I have been quite impressed by the address you delivered some years ago at a meeting of the Princeton Branch of the National Association for the Advancement of Colored People. I know how hard it is to awaken the conscience even of good-hearted and well-meaning people when deep rooted prejudices are in the way.”

He concludes: “It is a great work indeed which you are doing relentlessly for the betterment of the living conditions of our Colored fellow-citizens, for justice and for the accomplishment of national unity of the American people.” The letter ends, “With sincere respect and kind wishes, Yours, Albert Einstein.” The letter is handsomely matted and framed, with a photo of Einstein.

“Einstein, writing in 1943, notes that he heard White speak ‘some years ago’. Something clearly must have deeply impressed him White’s speech for him to write this thoughtful letter to White over three years after the event,” said Michael DiRuggiero of The Manhattan Rare Book Company. “It’s also one of the few letters Einstein hand-wrote in English. German was his preferred tongue.”

According to the Princeton Herald, on April 28, 1940 Walter White was the keynote speaker at “an inter-racial meeting sponsored by the Princeton branch of the National Association for the Advancement of Colored People,” where his topic was “What Happens to Democracy When it Encounters the Color Line”. This is the speech that inspired the letter, albeit three years later.

At the time, Princeton University did not admit African Americans, and the community was debating the question as to whether to end segregation at the school. Princeton finally did admit its first African American student, but not until the fall of 1947 – seven years after White’s speech and four years after Einstein’s letter.

In his book Albert Einstein, author Walter Isaacson observed, “To protect the rights of the individual…was Einstein’s most fundamental political tenet. Individualism and freedom were necessary for creative art and science to flourish. Personally, politically, and professionally, he was repulsed by any restraints. That is why he remained outspoken racial discrimination in America…. As a Jew who had grown up in Germany, Einstein was acutely sensitive to such discrimination. ‘The more I feel an American, the more this situation pains me,’ he wrote in an essay called The Negro Question for the January 1946 issue of Pageant magazine. ‘I can escape the feeling of complicity in it only by speaking out.’”

Even more directly, in his 1946 commencement speech to Lincoln University, the first degree-granting Historically Black College and University (HBCU) in the United States, Einstein strongly denounced segregation as “an American tradition which is uncritically handed down from one generation to the next,” noting that, “There is separation of colored people from white people in the United States… That separation is not a disease of colored people. It is a disease of white people. I do not intend to be quiet it.”

The remarkable letter from 1943, apparently unpublished, is one of the earliest examples of Einstein’s interest in condemning racism in the United States. His words are strong and prescient, and resonate just as strongly today as when they were first written. The letter would make a fine and important addition to anyone’s collection. Or, it could also be proudly displayed in a museum.

The Manhattan Rare Book Company:
The Manhattan Rare Book Company is located at 1050 Second Avenue (Gallery 90) in New York City. The firm is always in the hunt for rare and important books, especially ones having to do with literature, history, science, art and photobooks, and illuminated manuscripts. To inquire buying or selling a rare book, you may call them at 212-326-8907; or, you can email them at [email protected] To learn more, please visit www.manhattanrarebooks.com.