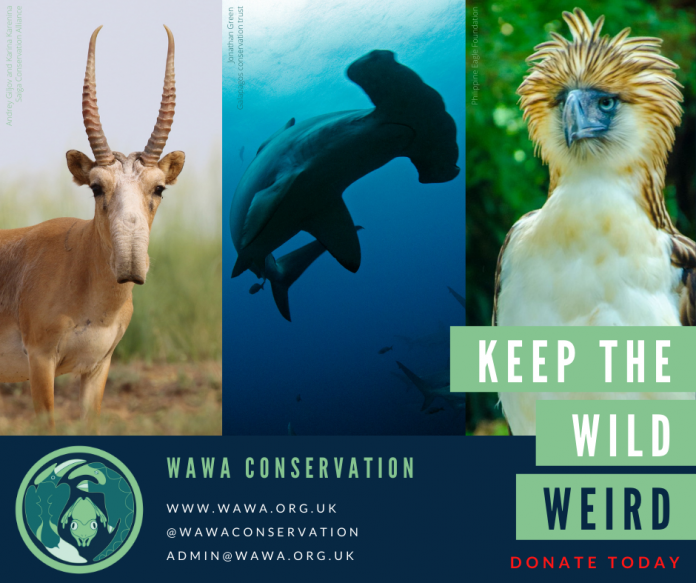 The first fundraising campaign from Weird and Wonderful Animal Conservation (WAWA) launched on 13 November 2020, raising funds to support three unique and endangered species. WAWA’s approach to fundraising tackles the big issue faced by conservationists: the huge donor bias towards iconic animals such as lions and tigers. WAWA’s efforts aim to bring lesser known species, that might otherwise miss out on funds, into the spotlight to protect them from extinction and safeguard biodiversity across the planet.

WAWA has a particular focus on EDGE Species (Evolutionarily Distinct and Globally Endangered) and with 32,000 species currently threatened with extinction, there is a lot of work to be done! For their very first campaign, the team at WAWA have selected three critically endangered species that represent land, sky and sea; the Saiga Antelope, the Philippine Eagle and the Scalloped Hammerhead Shark.

The first campaign will raise funds to be donated straight to conservation projects working on the ground (or air or sea!) with these species. The saiga is an ancient desert dwelling antelope whose crazy nose allows it to live in one of the largest temperature ranges on the planet (-40 in winter to +40 in summer). WAWA will be helping The Saiga Conservation Alliance and their field monitoring project where a mix of scientific research and community engagement efforts are used to survey the habitat, breeding and health of these unusual looking antelopes. For the Saiga Conservation Alliance, £80 could buy enough gasoline to fuel the rangers’ motorbike patrols for a whole season.

The second species aided by WAWA’s campaign is the scalloped hammerhead shark, a beautiful mystery of the deep whose weird appearance is matched by its unique social behaviour which has unfortunately contributed to their own downfall as large groups are caught in fishing nets when they gather.  The funds raised by WAWA will be donated to Galapagos Conservation Trust’s Endangered Sharks of the Galapagos project which aims to research and create safe ways for at-risk shark species to birth and migrate in a protected environment. For the Endangered Sharks of the Galapagos Project, £35 could help researchers create and analyse four hours of remote camera shark footage.

The colossal, blue-eyed apex predator of the Philippines, and one of the most endangered eagles in the world, completes the trio that WAWA will be supporting. Funds raised will go to the Eagle Research Project at the Philippine Eagle Foundation, and their field monitoring project, tagging, tracking and monitoring the species in the wild. For the Eagle Research Project £100 could cover the fees of two guides for ten days of eagle monitoring during which invaluable data can be collected to inform effective conservation action.

During the six week fundraising drive, WAWA hopes to raise enough funds to make a real difference to these three important projects. The campaign begins on 13 November 2020 and donations can be made through wawa.org.uk

Jack Haines, Chairman of WAWA Conservation, says “I’m so excited for WAWA to get started. I think we are filling the much discussed yet little addressed gap in the world of wildlife conservation. The icons of the wild, those which we were all taught as children, and those that are regularly the focal points of nature documentaries, tend to get all the attention and a similarly disproportionate amount of conservation support. While this is great news for the likes of the giant panda, which has been downgraded thanks to the exceptional conservation attention it has received, this does little to help the likes of the Hispaniolan solenodon that is just as important to its ecosystem and has unique genetics that once lost will not be seen again on this planet. We want to keep the wild weird and help save the strange species that make this world such an incredible and beautiful place to be.”

Weird and Wonderful Animal Conservation is a new non-profit organization dedicated to saving the most unique and distinct species in the world from extinction. A big issue faced by conservationists is the huge donor bias towards the more well-known animals. WAWA Conservation looks to obtain funding for edge species conservation to preserve our weird and wonderful animals; from beetles to narwhals and beyond.

GCT is the only UK registered charity to focus solely on the conservation of the Galapagos Islands, one of the most unique and ecologically important, but vulnerable, areas in the world.

The Saiga Conservation Alliance SCA is a network of researchers and conservationists working to study and protect the critically endangered Saiga Antelope (Saiga tatarica) and their habitat.