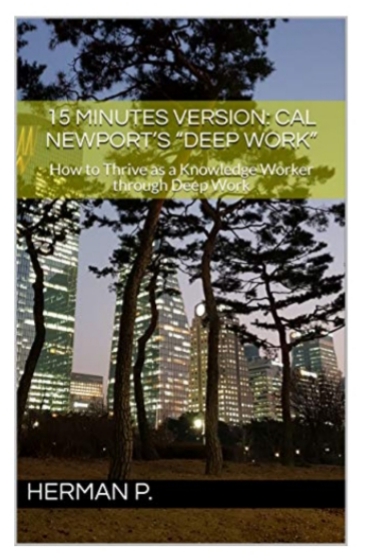 The book summarises and analyses Cal Newport’s recent book called “Deep Work (Rules for Focused Success in a Distracted World)” in under 15 minutes.

It is designed to be read by knowledge workers and professionals who want to keep their skillsets sharp in a rapidly changing economy.

The book also brings together various strands of thought extracted from Cal Newport’s other writings on the themes of: personal productivity and doing genuinely meaningful work.

The book can be found on Amazon:

By way of introduction, the author (Herman P.) writes:

Rather than attributing academic success to fate, luck, genes or overwork (as many people mistakenly tend to do), he discovered a set of unconventional strategies that are commonly employed by high-performing students from diverse backgrounds and not by others.

His interests have now shifted to knowledge work (reflecting his own transition from a graduate student to a postdoctoral researcher to a professor of computer science). The previous theme of studying smarter has evolved into working smarter as a knowledge worker.

The referenced title – Deep Work – is a well-written and well-researched book. It offers a countervailing view to the worldview represented by multi-tasking, open-plan offices and social media. There is more than a hint of concern that the world is overvaluing instant gratification and quasi-productivity and undervaluing meaningful work.