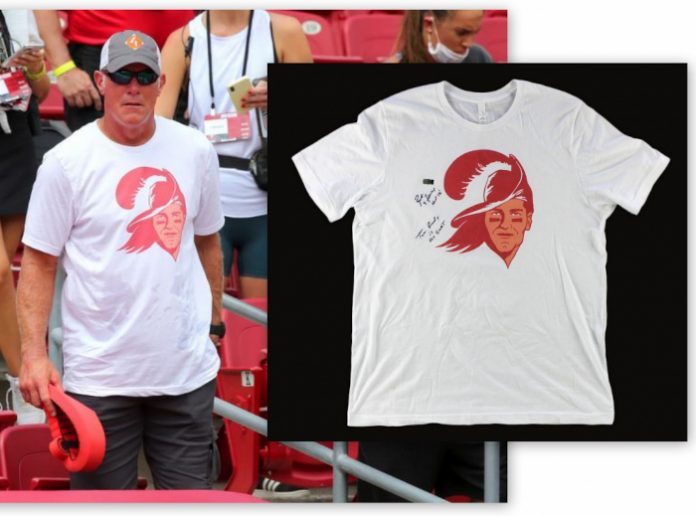 Phoenix, AZ, September 25, 2020 — A Tampa Bay Buccaneers T-shirt worn by NFL Hall of Fame quarterback Brett Favre at this year’s game between the Buccaneers and the Carolina Panthers on September 20th – signed by Favre with “HOF 16” (for his induction into the Pro Football Hall of Fame in 2016) and “Tom Brady is the GOAT” (the acronym for “Greatest of All Time”) – is up for bid in an online-only auction being held by Pristine Auction. The sale ends Tuesday, September 29th.

People can register and bid now on the Pristine Auction website: www.pristineauction.com. All the proceeds from the sale of the shirt will go to benefit Brett Favre’s Favre4Hope Foundation.

Brett Favre’s appearance at the Buccaneers game wearing the shirt was a significant gesture, as it followed his public support of Tom Brady, the longtime quarterback of the New England Patriots who is playing in his first season with Tampa Bay. Favre’s public support followed Tampa Bay coach Bruce Arians’ negative comments directed towards Brady’s after his first week play. The comments from Favre were replayed by countless media, including NBC Sports, which reported:

“One of the most surprising developments from Week One came in the aftermath of the Buccaneers-Saints game, when Tampa Bay coach Bruce Arians publicly called out quarterback Tom Brady, not once but twice. That’s something Patriots coach Bill Belichick has never done, to Brady or to any other quarterback.” Favre fired back his thoughts on Sirius XM Radio: “I think the last person you would want to call out after the first game of the year is Tom Brady.”

Favre has a theory: “Maybe they had a mutual truce going into the game, going into the season, something like, ‘Hey, I’m going to be hard on you. I want the guys to know we’re going to treat you the same even though technically I’m not, so are you OK with it?’ If they have that truce, great. If not, I think we are barking up the wrong tree. Dissension could easily enter quickly.”

He added, “Maybe the Saints didn’t do anything they weren’t ready for other than we didn’t protect very well Tom gets hit a couple of times, you get a little jittery, it happens. First half of the Super Bowl against the Falcons he was getting nailed, played lackluster at best. They went in, had a ‘Come to Jesus’ at halftime, they don’t even come close to touching him in the second half, and he’s flawless. So they clean up the protection, and the timing, the chemistry will come.”

Will success come for Brady overnight? “I highly doubt it, but it will come pretty quickly though and they very easily could be 4-1 after five weeks,” Favre said. The shirt includes an official exclusive Brett Favre hologram and matching Certificate of Authenticity from Radtke Sports, the highly respected sports authenticator that has an exclusive memorabilia contract with Favre.

Favre attended the Panthers-Buccaneers game not as a fan but as an NFL Films correspondent. Favre works for The Grind, a show on Epix produced by NFL Films. He attended the game in connection with a feature on Buccaneers linebacker Devin White. According to reports, he was accompanied at the game by a couple of family members, along with a fairly sizable film crew.

Tom Brady spent the first 20 seasons of his career as quarterback of the New England Patriots before joining the Tampa Bay Buccaneers prior to the 2020 season. He has played in nine Super Bowls (an NFL record), winning six of them (also a record). He’s also won a record four Super Bowl MVP awards. Because of his numerous NFL records and accolades, many sports writers, commentators, and players consider Tom Brady to be the greatest NFL quarterback of all time.

Pristine Auction:
Pristine Auction is a family owned and operated consignment-based online auction house. Since its founding in 2010, the company have grown from a spare bedroom to a 37,000-square-foot facility in Phoenix, Arizona. A team of over 100 people actively services the many customers. The firm specializes in autographed memorabilia, sports cards, coins, art and collectibles. By working with leading authentication companies, it ensures all items offered are 100% authentic. Pristine Auction offers items certified by trusted names, including Leaf, JSA, PSA, Beckett, Steiner Sports, Schwartz Sports, TriStar, Total Sports Enterprises, Upper Deck Authenticated, and MLB Authentication. Pristine Auction runs multiple weekly auctions, a premium monthly auction, and daily and 10- minute auctions. In addition to auctions, it has an extensive web store with display cases, custom framing options, and other accessories to display memorabilia. Pristine Auction is always accepting quality consignments for future auctions. To inquire consigning a single piece or an entire collection of sports-related items and memorabilia, you may send an email to [email protected] To learn more Pristine Auction, please visit www.pristineauction.com.