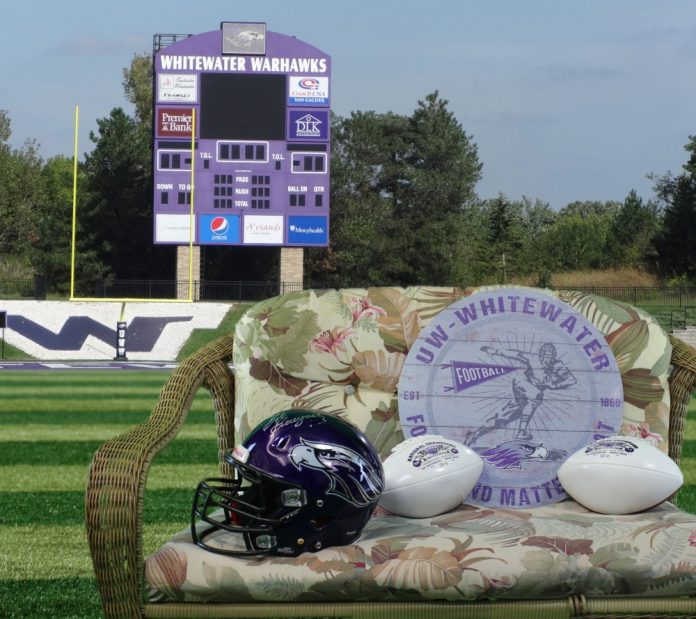 Whitewater, WI – Covid-19 forced the cancellation of the NCAA Division III 2020 fall football season, but the generosity and community spirit of the University of Wisconsin-Whitewater football team are alive and well in a holiday auction to benefit a former student and brain injury survivor. The auction, which is being organized by business students at UW-Whitewater and hosted on eBay, will officially begin on December 8 (https://tinyurl.com/y4pc4ydt)..

Hapka sustained a life-threatening brain injury during a chiropractic adjustment, and he nearly died after being misdiagnosed at a local ER. There was no legal settlement, Hapka and his family were financially devastated by his ongoing medical needs, and they are in danger of losing their home.

Grace Jezuit, a junior Digital Marketing and Human Resource Management major at UW-Whitewater, is using her Facebook skills to help Hapka, and she hopes the school’s alumni will come together in this effort.

“Our alumni are an important part of the Whitewater family,” Jezuit said. “We need them to join us in helping out a fellow Warhawk in this time of need.”

Rob Davis, a junior Marketing and Film Studies major, is building an Instagram presence for Life Beyond Brain Injury.

“I hope to raise awareness Tom’s incredible story and generate the support he needs,” Davis said. “Tom and his family have given many years to UW-Whitewater, and now they need their Warhawk family behind them.”

Salmai Valadez, a senior Marketing major, is lending her marketing expertise to the campaign for Hapka.

“I want to use my marketing and public relations skills to support Life Beyond Brain Injury and make the community aware of Tom’s story,” Valadez said.

Those wishing to participate in the auction are encouraged to visit https://www.lifebeyondbraininjury.org/ for details and to learn more Tom’s story.