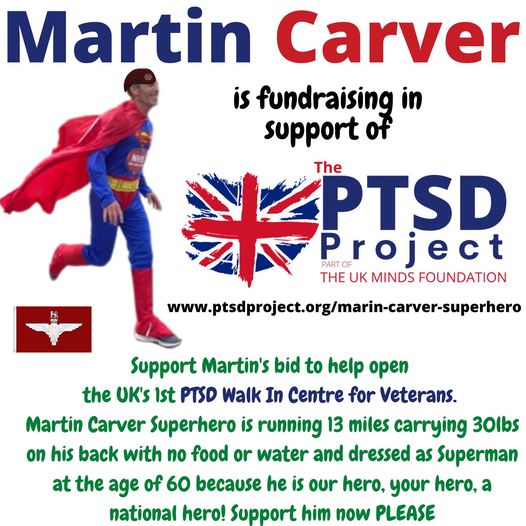 Martin Carver is raising money for The PTSD Project UK  The goal is to raise £30,000 to establish the U.K’s first ever PTSD Walk-in Centre for Veterans of the Armed Forces.

This 60 year old former Paratrooper, from 1 Para, has swapped one superhero costume for another and is now adorning a Superman outfit to carry out what some would say are crazy challenges.

Having previously raised money for the NHS during lock down, Martin has switched his attention to addressing the serious issue of Post Traumatic Stress Disorder amongst soldiers, sailors, airmen and women returning from active service in some of the most troubled spots around the world.

All of these problems can be addressed by The PTSD Project UK using early intervention, effective  treatment with no waiting lists, ongoing support and assistance with re-integration into civilian life.

Waiting times for treatment pre Covid 19 were 18 months plus, in a post Covid world who knows how long injured servicemen and women will be waiting for treatment? How many more Veterans need to die as a result of what is a battlefield trauma; an injury of the mind.

The PTSD Project UK is run entirely by volunteers, many of whom hold down full time jobs such as:  shop assistants, counsellors, therapists, care home workers and small business owners. one of our volunteers runs a web-hosting business and offers his server, (web-site hosting) free of charge to Veteran’s organisations. The Volunteers are led by Kate, who is a full time Mum, anyone interested in joining her team should e-mail [email protected] and if you are an organisation supporting Veterans e-mail [email protected] to get your site hosted for free.

The volunteers of The PTSD Project UK sold hand crafted items and  promotional wristbands on Facebook and Twitter during the lock down and used the money to establish the Veterans in Crisis Line 0300 365 0333, open 10A.M to Midnight 7 days a week.

This is sustained by the Veterans’ Benefit Lottery, which is a members only draw, operated by The PTSD Project UK giving you the chance to win up to £10,000 each week. It’s just £1 p/w, billed monthly at £4 for  four entries.

This is by far the best way to support The PTSD Project on a long term basis, as it them the ability to sustain current programmes whilst establishing new ones such as their fledgling  Vulnerable Veterans Scheme

which protects the rights and status of Veterans of the Armed Forces.

You can support Martin Carver’s campaign to raise £30,000 by donating what ever you can afford here