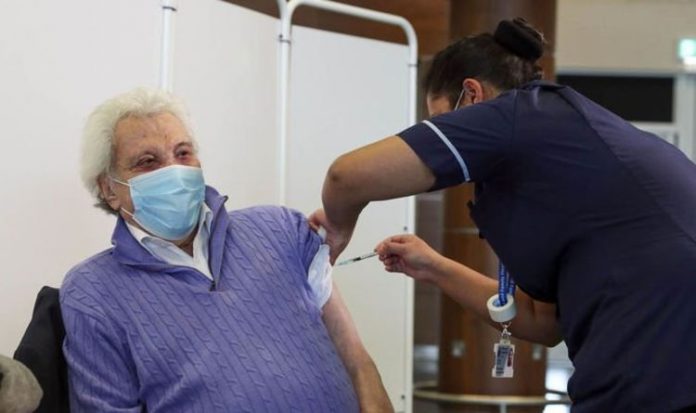 Nadhim Zahawi spoke as GP-led immunisations began in south Yorkshire, with 200 more clinics expected to be up and running nationwide by tomorrow. Mr Zahawi said during the first week that England had administered 108,000 vaccines, Wales 7,897, Northern Ireland 4,000 and 18,000 in Scotland. The Prime Minister’s official spokesman said the rollout of the Pfizer/BioNTech serum – the first to be approved in the world – was “a marathon not a sprint” but would increase rapidly over coming days.

He added: “We saw the rollout in hospitals first, now more and more GPs are coming on line to be able to provide the vaccines. We have been clear that we will roll out to care homes as well before Christmas.”

It had initially been hoped that 10 million doses would be in the country by the end of 2020, but this has now dropped to five million.

Health Secretary Matt Hancock hopes several million in the most at-risk categories can be vaccinated before Christmas.

He said: “This is just the start and we will steadily ust teadcination expand our vaccination programme – ultimately helping everyone get back to normal life.”

As the GP vaccination programme swung into action at two surgeries in Doncaster yesterday, a 94-year-old great-great grandmother at the front of the queue said people would be “very silly” if they turned down the chance to have a jab.

Joyce Dowd said she hoped it would enable her to be able to see her great-great grandchild, born during the pandemic, for the first time. But Mrs Dowd insisted she would not see the baby until she is sure it is safe. She said: “You’ve got to think safety-wise, no good if you don’t.”

Mrs Dowd said she felt fine after having the vaccination at around 8am. She added: “It feels a little bit stiff but it doesn’t hurt. There’s no worries to it. If people don’t have it done, they’re being very silly. At our age you can pick anything up.”

She said she has one daughter, four grandchildren, eight great-grandchildren and three great-great grandchildren, but has decided to have a celebration in the new year rather than at Christmas. “I just hope they don’t all come at once,” she joked.

Dr Kate Mansfield, a GP at the Scott Practice in Doncaster and the clinical director of Doncaster Central Primary Care Network, said: “It’s been a bit of a crazy week. It’s been amazing to see just how hard everybody’s been working. I’m just so proud. The hours and hard work that people have been putting in to get this going is unbelievable.”

Dr Mansfield said 975 jabs will be administered at the centre over the next three days.

More than 100 surgeries across England have started storing doses and East Park surgery in Leeds also began giving jabs. The first patient was 84-year-old Frank Cook, a former RAF and car industry worker. He said his motivation was being able to see his son, daughter and two young grandchildren.

Formal statistics will be published every week from next week to give a running total of how many people have been immunised.

Two doses of the Pfizer jab are required 21 days apart for the vaccine to be fully effective and experts say at least 60 per cent of the country needs to be vaccinated to achieve herd immunity – when the virus is unable to spread and infect the most vulnerable. Over 80s and health workers are first in line.