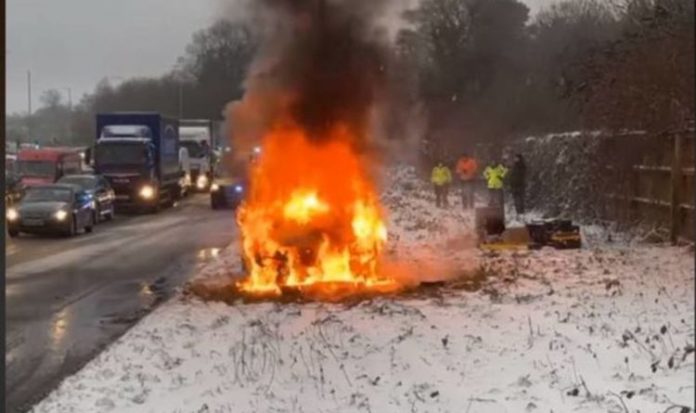 Firefighters were called at around 8.20am to respond to a van catching alight near the Lord Lees roundabout on the snowy A229. Two fire engines attended the blaze as the roads are being slowly being reopened lane by lane. Kent Police also tweeted they had to deal with a six-vehicle pile up on the road at around 7.20am. It is reported the van fire started accidentally and so far, no casualties have been reported as the country is gripped by the icy weather.

Kent Fire and Rescue sent two fire engines to tackle the blaze and extinguished the flames at around 9am.

A spokesman said: “Kent Fire and Rescue Service was called to reports of vehicle alight near the Lord Lees Roundabout, off the A229 Blue Bell Hill, Chatham.

“No casualties were reported. It’s believed the fire started accidentally.”

Traffic built up on the icy A229 as it is believed six cars were involved in a pile-up at around 7.20am.

One man has been taken to hospital so far for injuries which are not life-threatening.

Kent Police said: “Officers are currently at the scene where one person is reporting injuries.

“The carriageway has been closed and traffic is being diverted onto the Lord Lees Roundabout. Drivers may wish to consider alternative routes.

Storm Darcy blanketed parts of the UK with snow and ice overnight with some gritters failing to properly prepare Britain’s roads.

Many train lines have warned not to travel today with many amending their timetables.

Some travellers have found it difficult to navigate through the snow as a stranded lorry in Broadstairs, Kent, held up a road for several hours as it could not move.

Coronavirus vaccine centres have also had to close, with at least eight confirmed as being shut due to the weather.