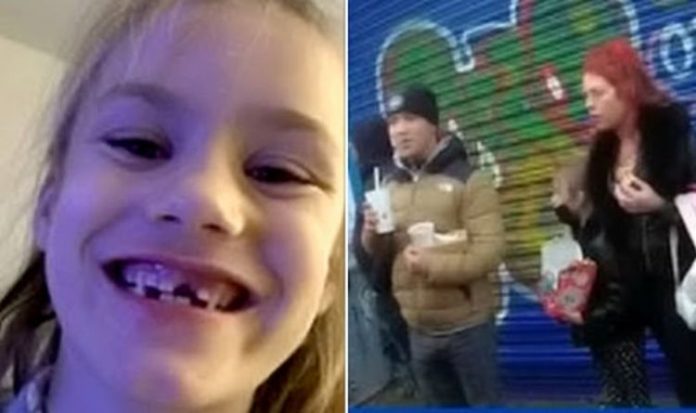 Tiolah, known as Tillie, vanished after being taken for a McDonalds’ meal by a neighbour called Annmarie Lawton, 29, and Adam yesterday afternoon.

She failed to return to her home in Bedminster, Bristol, and was reported by her mother to be missing at 7.00pm yesterday.

The youngster seen is known to have visited a McDonalds store in Sheen Road, Bedminster, at around 3.00pm.

CCTV images taken from nearby East Street, Bedminster, show the youngster and two adults stood near a metal shutter covered in graffiti eating the food bought from McDonalds.

That was the last time the trio are believed to have been seen.

Tiolah is described as white with blonde hair, wearing polka dotted leggings a black jacket and a light-coloured rucksack.

Although reason for Tiolah’s disappearance could be valid, police are still treating the incident as an abduction.

DCI Ed Yaxley said: “We have no evidence that Tiolah has come to any harm but she has now been absent from home without her mother’s permission for more than 12 hours.

“Annmarie, if you see this, please contact us straight away. We just want to return Tiolah safely back to her family.”

A statement from Avon and Somerset Police said: “The girl is believed to be with a neighbour and family friend, Annmarie Lawton, and an unknown man, pictured today in East Street, Bedminster.

“Annmarie, 29, visited Tiolah’s home on Wednesday 16 December with a man known only as Adam. She and Adam took Tiolah out soon after 3pm to visit McDonald’s in Sheen Road, Bedminster. They were expected to return within an hour.

“They have not brought Tiolah home or returned to Annmarie’s own home since. Tiolah’s mother reported her missing at about 7pm.

“While there may be a reasonable explanation police are treating this investigation as an abduction.

“Tiolah is described as white, with blonde hair. She was wearing black and white polka dot leggings and a black jacket and had a light-coloured rucksack.

“Annmarie is white, with long red hair, about 5ft 6ins tall. She was wearing a black bomber jacket with a fur collar, black leggings and black trainers.

“The man is described as in his 20s, about 5ft 6ins tall and stocky with a round face, olive skin and bald head. He was wearing jeans, a dark grey zip-up hoody and a beanie hat and in the pictures has a light brown padded jacket on.

“Annmarie has links across the greater Bristol area and they may be using public transport.