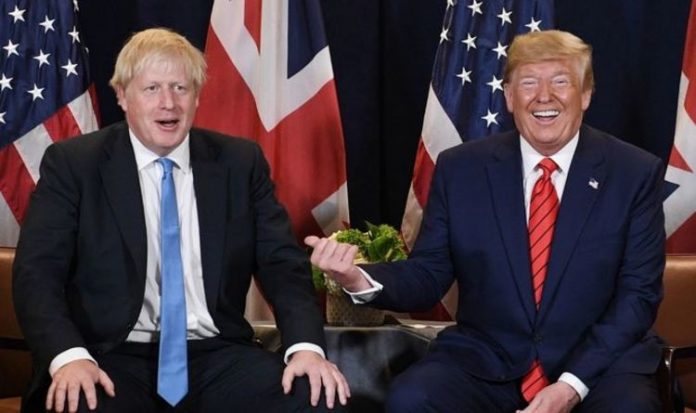 According to Robert Lighthizer, Mr Trump is attempting to conclude a mini-trade agreement aimed at reducing tariffs from January 1. He indicated a deal could be done before the turn of the year which could remove crippling tariffs on British products such as Scotch whisky from a mini US-UK trade deal. Hopes of a deal were increased this week after the UK dropped tariffs on aerospace companies such as Boeing.

The EU had enforced trade tariffs on products from Boeing, which accounted for £3billion but now the UK has left the bloc, Government officials have moved to suspend those measures post-Brexit on January 1.

Mr Lighthizer told the BBC: “I’m talking to International Trade Secretary Liz Truss, about trying to work out some kind of a deal.

“I’m hopeful we can get some kind of an agreement out you know, we don’t have a lot of time left.

“We have the advantage in that both the US and the UK – particularly the current government of the UK – are not big subsidisers, where some other countries are more inclined to subsidise.

“So it would be helpful if we could come to some kind of agreement.”

By removing tariffs on Boeing products, UK ministers hoped the move could tempt the US into a trade deal before 2021.

The retaliatory tariffs placed on Scotch Whisky amount to £5.6billion and have been one of the main talking points during discussions in an overall free trade agreement with the US.

If the mini-trade agreement is signed before the end of the year, both sides will move to continue negotiations over an overarching trade deal next year.

JUST IN: Priti Patel erupts at claim UK not safe after Brexit ‘Not true at all’

After a trade deal with the EU, an agreement with the US is vital for Britain’s economy post-Brexit.

As of 2018, the UK also operates a trade deficit whereby exports exceed imports of £45.4billion with America.

Mr Biden had hit out at the UK following the introduction of the UK Internal Market Bill.

Due to the legislation’s implication on Northern Ireland and in particular, the Good Friday Agreement, he stated any US-UK trade deal will hinge on the bill being removed – certain elements have since been withdrawn.