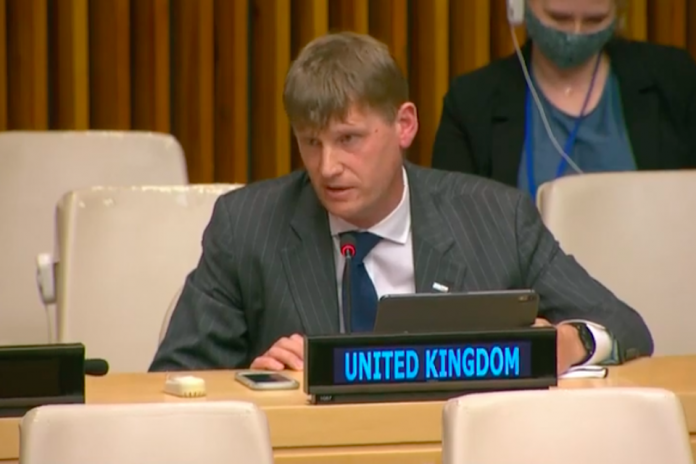 Mr President, let me say that I believe that today showed contempt for members of this Council.

You, Mr President, put a briefer to the vote. You received two votes in favour alongside your own. Members of this Council did not support your briefer, but you chose to ignore the decision of this Council.

I’m reminded of the time when Russia demanded a meeting on Ukraine, which Russia insisted must be timed to coincide with the inauguration of the President of Ukraine. When you failed to get the votes in favour of that meeting taking place, you also read out your intervention as if the meeting were happening. Again you showed contempt for the decision of the members of this Council. But it is perhaps not a surprise that Russia chooses to ignore the rules that it wants others to abide by.

And I would say to you, Mr President, that when you proposed briefers that we were not particularly enthusiastic about in your presidency last year, we accepted them. It was a discrete event, a counter-terrorism event on an issue not usually discussed in the Council. But this meeting is a monthly meeting on a particularly sensitive issue on which Russia is directly engaged on the ground. So please do not pretend that this is some sort of presidency right to propose briefers. Russia is a party to the issue of chemical weapons use in Syria, as we all know. We should be particularly cautious about agreeing to briefers whose only purpose can be to undermine and call into question the integrity of the OPCW. Such briefers will only serve to politicise our discussion and distract us from the real issues.

And with regards to Mr Bustani, as I said before, he’s had a distinguished diplomatic career and we have full respect for him, but he left his role as Director General of the OPCW in 2002. And it was clear from your words today, Mr President, that this casts a long shadow over him and his views. It was long before resolution 2118 was adopted, long before Syria even acceded to the Chemical Weapons Convention, and long before the OPCW had carried out any investigations in Syria. I’m afraid, with respect to him, he is irrelevant to our discussion of implementation of resolution 2118. So I call on all those who continually seek to undermine the OPCW in order to protect the Syrian regime – and perhaps to protect themselves – from accountability to stop doing so.

I want to just express my full agreement with what my US colleague has said about the Arria format meeting on the 20th of September. And I would say that if the Russian Federation was at all interested in a genuine discussion of evidence, they would have attended the meeting during the Estonian presidency with the Director General of the OPCW and the head of the IIT, Mr Santiago Oñate. But the Russian delegation refused to permit the head of the IIT to brief in a formal Council meeting. It then left empty chairs in an informal meeting attended by all other Council members. So, given the Russian delegation has spoken so passionately in favour of transparency today, and given it is willing to propose briefers last involved with the OPCW 18 years ago, I have no doubt that the Russian delegation will be supporting an invitation to Mr Oñate to brief this Council so we may debate the evidence.

Now, Mr President, let me turn to the real purpose of this meeting. I want to thank the Director General of the OPCW for his 84th monthly report. Regarding the work of the Declaration Assessment Team, we note that the Syrian regime has provided some further information to the DAT, including two amendments to its initial declaration. That is why, by the way, colleagues, we do need the answers to the questions that have been raised continuously by the DAT. Syria’s declaration is not a complete declaration. These further amendments are, as I say, further evidence that the initial declaration was inaccurate. And I hope very much that this further information assists with clarifying some of the many outstanding issues. And I urge Syria to cooperate fully with the OPCW to make progress on all of the outstanding issues.

As we said last month, the outstanding issues in Syria’s declaration are significant, and they go to the heart of Syria’s compliance with the Chemical Weapons Convention. Until all outstanding issues are resolved, we cannot be sure of the complete elimination of Syria’s chemical weapons programme. These concerns are not hypothetical, particularly in light of the findings by the OPCW-United Nations Joint Investigative Mechanism, and now the OPCW Investigation Identification Team, that the Syrian regime has used chemical weapons on seven occasions – at least seven occasions – since 2013.

Mr President, after six years of outstanding compliance issues and further confirmation of the Syrian regime’s use of chemical weapons by the IIT in April this year, we welcomed the robust, proportionate and reasonable action taken by the OPCW Executive Council in its decision of the 9th of July. In that decision, the Executive Council gave Syria 90 days to come into compliance with the Chemical Weapons Convention. The deadline for this action is tomorrow, and we call on Syria to make a final effort to respect the decision, to address the issues in its declaration and to come into compliance with the Chemical Weapons Convention. Should the DG find that Syria has not completed the stipulated measures in full, it will be for the Conference of States Parties to decide on appropriate action to take.

The confirmed use of chemical weapons by the Syrian regime represents a breach of resolution 2118, as does its ongoing failure to comply with the Convention and to cooperate fully with the OPCW. The Council should address non-compliance of its resolutions and the clear threat to international peace and security they represent.

Finally, Mr President, we note that last Friday, the 2nd of October, the OPCW Fact-Finding Mission published its reports on the alleged chemical weapons attacks in Saraqib in 2016 and Aleppo in 2018. We continue to consider the detail of the reports and, in the case of the alleged Aleppo attack in 2018, the findings of the FFM appear consistent with our assessment at the time that it was highly unlikely that chlorine was used as alleged or that the opposition was responsible for the incident. And I think it would have been helpful if Russia or Syria had provided evidence with the FFM, had they had it of any attack.

In the case of the Saraqib report, there is evidence suggesting the possibility of a Syrian regime chlorine attack. There is evidence of the presence of a helicopter, a barrel bomb, which was not filled with conventional explosive, and exposure of victims to an irritant consistent with chlorine. These are all familiar characteristics of regime chlorine attacks, such as those on Qmenas and Sarmin in 2015, for which the JIM identified the regime as responsible. In this case, however, the result of the FFM’s analysis of all available data did not allow the FFM to establish whether or not chemicals were used as a weapon. We are content to accept the FFM’s conclusion in the absence of further evidence, which would clearly show whether or not a chemical attack took place.

Thank you very much, Mr. President.