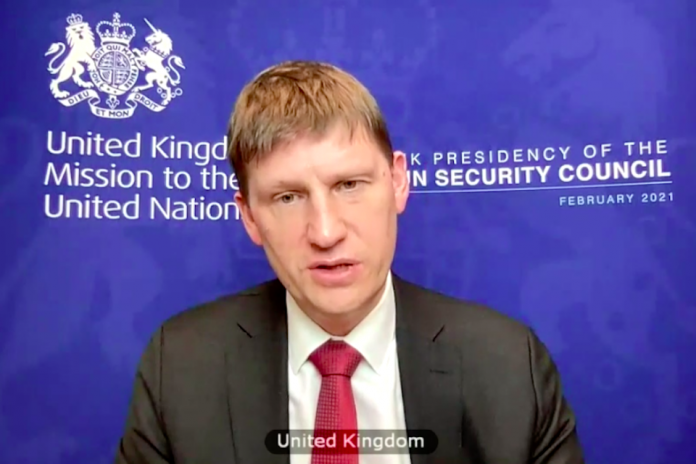 I join others in condemning this morning’s attack on 26 UN peacekeepers from Togo serving in the MINUSMA mission in Mali. We wish all those injured a swift and complete recovery.

As the Secretary-General’s report underscores, Daesh continues to pose a global threat. Despite territorial losses, the group remains able to inflict deadly harm in Syria and Iraq. We are concerned particularly by the IDP camps highlighted by the Secretary-General’s report. The United Kingdom facilitates the return of unaccompanied or orphaned children on a case-by-case basis and subject to national security concerns. But those who have fought for or supported Daesh should face justice for their crimes in the most appropriate jurisdiction – often where those crimes were committed.

Further afield, we’re concerned about Daesh’s presence worldwide, particularly in sub-Saharan Africa. Its online recruitment and incitement must also be tackled. The United Kingdom remains an active member of the Global Coalition against Daesh. We co-lead coalition efforts to tackle the propaganda threat.

At the United Nations level, the United Kingdom will continue to advocate for increasing focus on preventing terrorists’ misuse of the internet and aviation security, as well as emerging threats beyond Daesh like right-wing terrorism. We will also emphasise the need to protect and promote human rights and the rule of law while countering terrorism, and will prioritise prevention and whole-of-society approaches.

I want to conclude by associating myself with the comments of the representative of France in defence of the White Helmets. We’re used to hearing these slurs in our Syria debates and have responded in those meetings. It’s rather sad to hear it raised in a serious debate on counter-terrorism.