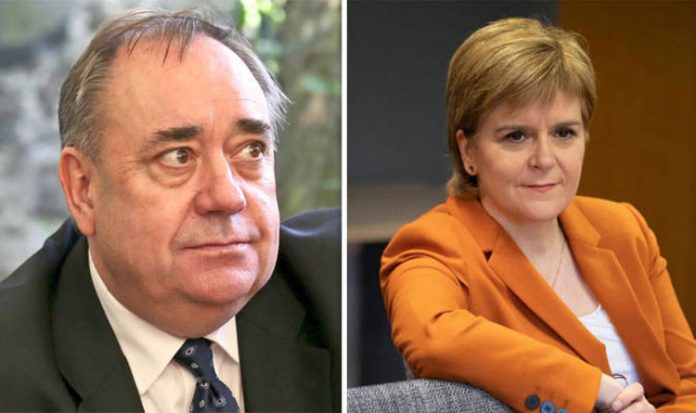 The former SNP leader resigned from the party on Wednesday after he was accused of sexual misconduct and harassment during his time as First Minister.

He has attracted more than £80,000 in donations, claiming Scottish leader Nicola Sturgeon only suspended him from the party due to “pressure from other political parties”.

Using a hashtag, he claims to be fighting “forFairness”. Mr Salmond is asking for donations despite also having five pensions and a TV show on Russia Today.

Jackie Baillie, a Labour Member of Scottish Parliament tweeted: “Alex Salmond crowdfunding his court challenge of the SNP Government is a disgrace. Saying it’s about independence is rubbish.

“This is simply about distracting attention from the allegations of sexual harassment. It is an abuse of power and our politics should be better than this.”

Ms Sturgeon tweeted: “If you can, please help Women’s Aid launch a legal challenge to the #rapeclause – the deadline is 9am tomorrow. If the target is not met by then, the money already raised is refunded and this disgraceful, anti-women policy will escape challenge. Let’s get it over the line.”

Tensions between Mr Salmond and Ms Sturgeon have risen after Ms Sturgeon refused to step in and stop a Scottish Government investigation into the allegations.

Mr Salmond is alleged to have told a female staff member to go to a bedroom in the first minister’s official residence of Bute House in December 2013.

He allegedly touched her breasts and bottom despite the woman asking him not to. He only stopped after she repeatedly told him to stop.

She said she felt “huge sadness” at his resignation but the complaints from two women “could not be ignored”.

She tweeted, alongside a link to the campaign: “Instead of donating to a rich and powerful man, I have a better idea.”

The SNP’s Brexit Minister, Mike Russell, who has been friends with Mr Salmond for 30 years told him to stop fighting the Scottish Government.

He told BBC Radio Scotland’s Good Morning Scotland: “There are clearly allegations that have to be responded to, and at the end of the day the only thing that will conclude this will be the facts.

“But I am very sad and I do hope we see him back, he has been a tremendous force, it is just a very sad moment for people like me and many, many, people.”

Mr Salmond is demanding a judicial review of the Scottish Government’s new complaints procedure which was introduced in December, a month before the allegations against Mr Salmond were made.

Writing on his crowdfunding page, he vowed to reapply for party membership “just as soon as I have had the opportunity to clear my name”.

He said: “My entire focus for the next few weeks is preparing for Judicial Review, against the Permanent Secretary to the Scottish Government, the initial stages of which began yesterday. My intention is to secure fairness because that is necessary to clear my name.

“I am enormously grateful for the messages of support and encouragement I have received, including from people of other political persuasions. I can assure them all that I will keep on going.”

He added: “The costs of a Judicial Review in the highest court in the land are huge. Many have asked how they can help directly.

“Therefore I have established a crowd funder to assist with costs. All sums received will contribute exclusively to progressing the Judicial Review and any money left over will be used to support good causes in Scotland and beyond.”