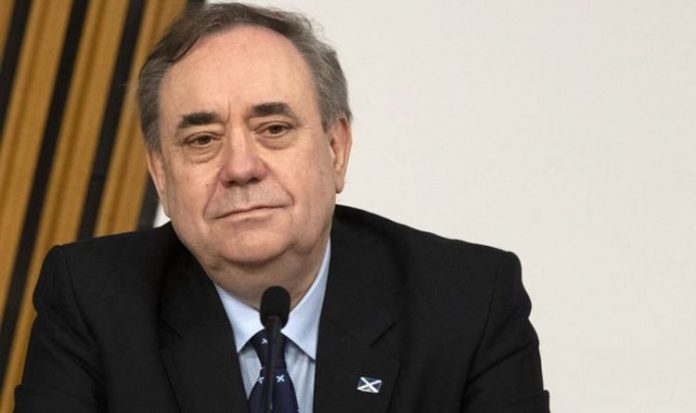 The former SNP leader – whose referendum campaign almost led to the break-up of the United Kingdom in 2014 – fears his fellow Scots would be persecuted by an “arbitrary authority”. Mr Salmond’s opening ­statement to the Holyrood inquiry also accused First Minister Nicola Sturgeon of using a Covid press conference to “effectively ­question the result of a jury”. His attack began a tense ­afternoon of evidence under oath as he meticulously laid out ­evidence for claims Ms Sturgeon misled the Scottish Parliament and breached the ministerial code.

If that is found to be the case there will be calls for the First Minister to resign.

Ms Sturgeon insists her ­former friend and mentor does not have a “shred of ­evidence” and denies lying to Parliament.

The Holyrood committee is examining her government’s handling of ­harassment allegations against Mr Salmond.

He was awarded a £512,250 payout in 2019 after a judicial review found that the investigation was “unlawful and tainted with bias”.

In last year’s criminal trial, a jury at the High Court in Edinburgh found him not guilty of 11 sexual assault charges and one further charge was not proven.

Mr Salmond told the inquiry Scotland’s Lord Advocate should be “considering his position”. But he stopped short of demanding the same of Ms Sturgeon.

He said: “I don’t think it is for me to judge what happens to someone who may have broken the ministerial code.

“I am in the fortunate position, as a former first minister, that that is no longer my responsibility.”

But he rapped his successor at the outset of four hours of ­evidence, saying: “I watched in astonishment on Wednesday when the First Minister used a Covid press conference to effectively question the results of a jury. The First Minister asserts I have to prove a case, I don’t.

“That has already been done. There have been two court cases, two judges, one jury.

“It is the Scottish government who are under examination. The government acted ­illegally but somehow nobody is to blame.

“The failures of leadership are many and obvious but not a single person has taken responsibility, not a single resignation or sacking, not even admonition.

“Scotland hasn’t failed, its ­leadership has failed. The move to independence, which I have sought all my ­political life, must be accompanied by institutions whose leadership is strong and robust and capable of protecting each and every citizen from arbitrary authority.”

Mr Salmond levelled dozens of claims against the government and party he once led. They included:

● Forty government documents ­provided to the inquiry were not disclosed in the criminal or civil cases, despite a search ­warrant. He said: “That’s obstruction of justice.”

● People within the SNP, including Ms Sturgeon’s husband Peter Murrell, pressurised and “colluded” with witnesses in the police inquiry.

● Ms Sturgeon broke the ministerial code if she went ahead with the judicial review despite being told the government would lose. The SNP administration has so far refused to publish its legal advice.

● One of the female complainers’ names was shared with Mr Salmond’s former chief of staff, contradicting what Ms Sturgeon told parliament. Three people can corroborate this claim, he said.

● Allegations that Permanent Secretary Leslie Evans breached the civil service code by meeting one complainant and phoning the other before he was told.

Ms Sturgeon is due to appear before the inquiry on Wednesday.