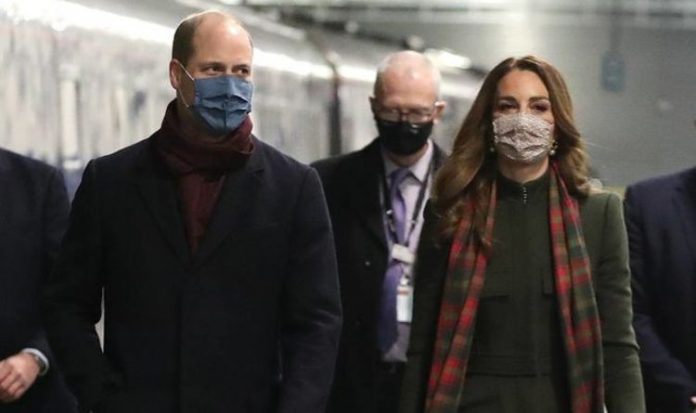 The Duke and Duchess of Cambridge received a rock and roll send-off for their country-wide tour by royal train when Shakin’ Stevens performed. Before William and Kate boarded the service, the singer, known for a string of hits in the 1980s, sang his festive smash-hit single Merry Christmas Everyone for the couple and a group of transport workers. The track topped the charts during Christmas 1985 and was picked by the royal couple as the song they wanted to hear.

The duke and duchess, who wore face masks, set off on Sunday evening from London’s Euston station on a 1,250-mile, three-day, tour, which will see them thank communities, outstanding individuals and key workers for their efforts during the coronavirus pandemic.

The first stop for the duke and duchess – who wore an Alexander McQueen coat and tartan scarf – has not been disclosed, but Stevens, whose real name is Michael Barratt, said his performance had been his first for royalty.

The 72-year-old performer said: “I’m loving it, it was lovely to be invited.”

He added that the couple were “certainly fans” of his festive hit, adding: “They picked it!”

Asked how he felt when he got the call asking him to perform, he said: “Absolutely hanging from the moon.”

Commenting on William and Kate’s decision to travel around the country thanking those who have made sacrifices this year, the singer said: “It’s lovely to give back isn’t it? It’s nice to give back and they are leading the way.

“It needs something to cheer us up doesn’t it? Because what we’ve got, we don’t know how long it’s going to go on for, so you have got to keep your pecker up.”

Stevens was the biggest selling singles artist of the 1980s and his hits compilation Singled Out is currently at number 10 in the album charts.

William travelled on the train on the day of the funeral of his mother Diana, Princess of Wales, in 1997, when he joined his father, brother and the Spencer family on the journey to the princess’s ancestral home Althorp for her burial.

In 2003, he journeyed overnight on the train to Bangor with the Prince of Wales to carry out a day of engagements in North Wales ahead of his 21st birthday.