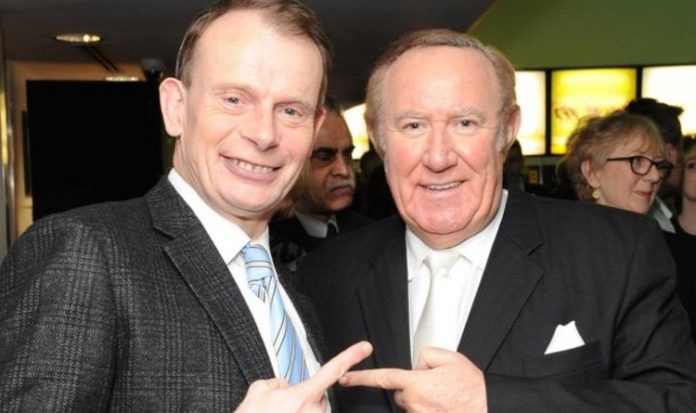 Mr Neil has announced he will be the face and chairmans of GB News, which will aim to rival news channels the BBC and Sky. The 71-year old left the BBC in September after 25 years, where he presented shows such as Daily Politics and helped with election coverage. His decision came after the BBC said his weekly Andrew Neil Interview show would not be recommissioned.

Now Mr Neil has put plans in place to launch “Britain’s news channel” early next year, which will be aimed at people who feel “underserved and unheard by their media”.

However, BBC presenter Mr Marr believes viewers may only watch GB News for a “short period”.

He said: “All competition is good.

“I hope we’ll demonstrate quite quickly that whilst partisan TV is great fun for a short period, after a while you turn back with great relief to something that is at least trying to be impartial.”

He told I News: “Andrew is a very good broadcaster. I wish he hadn’t left the BBC.

“But I don’t think the more politically partisan rivals to the BBC will find it easy.”

“GB News is aimed at the vast number of British people who feel underserved and unheard by their media.”

The BBC confirmed this summer that Mr Neil’s weekly interview show would not return after it did not air during the coronavirus pandemic.

A statement said: “We’d like to give our heartfelt thanks to Andrew for his many years of work for the BBC, during which he’s informed and entertained millions of viewers.

“From his early broadcasting days on Despatch Box in the 1990s to his recent forensic and agenda-setting political interviews, be has proved a formidable and hugely talented broadcaster.

“For years, he was at the heart of the irreverent and much-loved This Week and played a key role in the Daily and Sunday Politics, Politics Live and the BBC’s general election coverage.

“We wish Andrew every success in his new role; we’re sorry the US election coverage will be his last BBC presentation work for the foreseeable future but he will always be welcome at the BBC.”

Mr Neil also recently denied he was in the running to be the next BBC chairman.

He said on Twitter that he has “no interest in the job”.