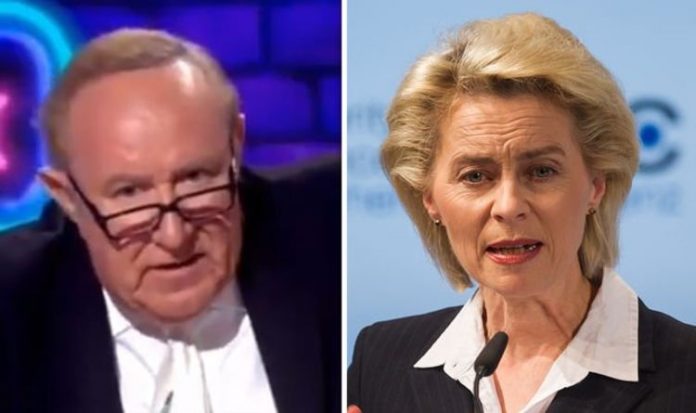 The EU leadership has come under fire this week for its botched handling of coronavirus vaccine distribution. The bloc has introduced export controls on COVID-19 vaccines made within its borders, affecting around 100 countries worldwide including the UK, amid a row about delivery shortfalls. The controversial move comes after a very public dispute between the EU and AstraZeneca, developers and manufacturers of the Oxford vaccine after the European Commission delayed approving their vaccine, resulting in slower distribution in the EU than in the UK.

Bizarrely, the EU even tried to enforce a hard border on the island of Ireland but were forced to backtrack after fury from Dublin and London.

Ms Von der Leyen, as European Commission President, has borne the brunt of many of the criticisms fired at the EU this week, not least from veteran journalist Andrew Neil.

Mr Neil said this morning: “Not sure people should be surprised that the EU, under Ursula von der Leyen, is in a shambles over vaccines.

“When she stood down as German defence minister, she left Germany’s armed forces in a shambles.”

The EU have come under fire for its bungled handling of vaccine distribution (Image: GETTY)

He wrote this in response to a clip someone had tweeted of him viscerating Ms Von der Leyen’s previous political experience when she had just been appointed as the new Commission President.

Speaking on his former BBC One programme This Week, he confronted a Europhile who was apparently claiming the handover of power from the old guard in the EU to the new leadership was looking positive.

Mr Neil said: “I still don’t understand why you think the EU is now in even safer or better, optimistic hands with a failed German defence minister, a failed Belgium Prime Minister, a former finance minister found guilty of negligence in a multi-million pound Euroscandal and Spanish politician who has been a cheerleader for repression in Catalonia.

“Why is Europe in good hands with people like that?”

In the clip, Mr Neil quoted a poll in German newspaper Der Spiegel that ranked Ms Von der Leyen as the second most unpopular politician in Germany.

He added that her department was under investigation for “corruption scandals and dodgy defence contracts”.

Mr Neil added that “most Germans” believed she was a failed defence minister including the Bundestag report on “Germany’s unpreparedness”.

He added: “The German Army was sent into the Arctic NATO exercise with broomsticks for guns!

“That’s the woman who is now President of the European Commission!”

Despite her alleged failures as defence minister, Ms Von der Leyen was a supporter of an EU Army and a United States of Europe.

She confessed in 2015 that some form of a bloc-wide army should be a long term goal.

The EU boss said Germany’s role in this was to “lead from the centre”.

Her words will confirm what many Brexiteers feared about the EU ‒ that the ultimate goal of the bloc is to further and further integrate into one federalised country.

Mr Juncker openly called for an EU Army to improve the bloc’s standing on the world stage by having a united force to defend its values and borders, and to send a message to Russia’s Vladimir Putin.

He said: “An Army like this would help us to better coordinate our foreign and defence politics, and to collectively take on Europe’s responsibilities in the world.

“Europe’s image has suffered drastically and also in terms of foreign policy, we don’t seem to be taken entirely seriously.”