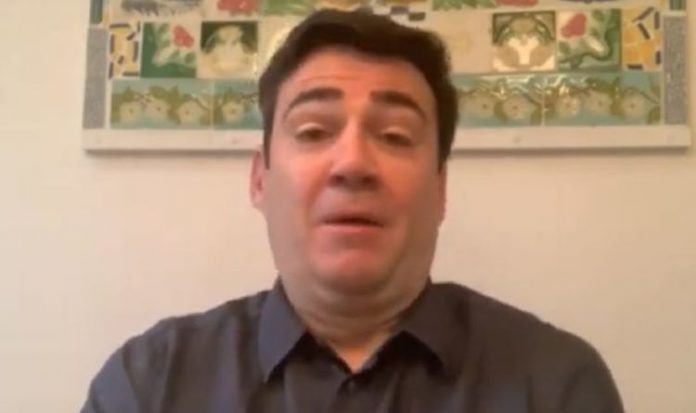 Sky News’ Kay Burley spoke to Grant Shapps on Tuesday morning, who hinted Mr Burnham was at fault for preventing the Government putting stricter coronavirus measures in place in Greater Manchester sooner. Ms Burley put this accusation to Mr Burnham, who hit back at the Government after stumbling in defence of his actions. Ms Burley said: “The Mayor of Greater Manchester, Andy Burnham joining us now.

“Your procrastinating allowed the virus to spread in your region.”

Mr Burnham took a deep breath and leant back in his chair before defending his actions on resisting a coronavirus lockdown in his area.

He replied: “Well, I am not sure that it is helpful to go over the coals.

“We should be facing forward at the moment but it is not true either, Kay.

“If you go back to the negotiations with the Government, we were left waiting over a whole weekend.

“Myself and the ten leaders of Greater Manchester were left waiting while the Government walked away, so they need to get their facts right.”

Ms Burley asked for a more detailed response that Mr Burnham should have done what the Government told him to do regarding more restrictions.

She said: “I want to pick up in more detail what the Transport Secretary Grant Shapps said as he was speaking on behalf of the Government.

“In a thinly veiled attack on you personally basically said that if you had come to the table and done what the Government had said earlier then more lives could have been saved.

“You cost lives by your actions in other words.”

He said: “Divide and rule is clearly what they are doing and everyone can see it, certainly in the northwest.

“Why are they punishing everybody because of a row with us? It was a row that needed to happen because we helped win a better support package for very low paid workers.

“There is a danger here that they are going to get a reputation as being a bullying Government, there are going to be disagreements.

“Governments get things wrong and they need to be challenged.

“As we all know it is the north of England that has been at the sharp end of Government behaviours and we won’t be pushed around like we were in the past.”

Ms Burley closed by remarking that the Prime Minister has to protect the whole country and has enough to deal with without having to worry about defiance from local “pesky politicians.”