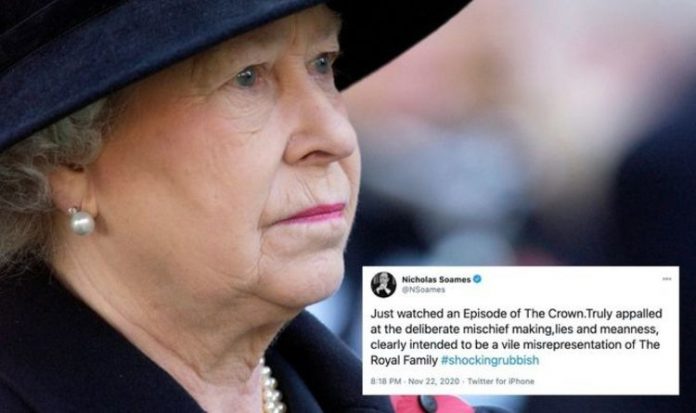 Sir Nicholas took to Twitter to join critics of the fourth season of the popular Netflix show. He wrote: “Just watched an episode of The Crown. “Truly appalled at the deliberate mischief-making, lies and meanness, clearly intended to be a vile misrepresentation of The Royal Family #shockingrubbish”.

Sir Nicholas didn’t specify which episode of the popular Netflix show he watched.

His grandfather is portrayed in the first season of The Crown and in one episode of both the second and third seasons of the show.

The former Tory MP’s sparked a lively debate among his followers.

Some said The Crown was misleading viewers by portraying on-screen real life events with added made-up details and drama.

“They should have stopped at HM’s early life.”

Others said Netflix wasn’t at fault if the public believed what was portrayed in a TV show.

This prompted another social media user, Simon, to reply: “How would you like fictional drama on your family without recourse.

“Mud sticks and it hurts. By the way I have switched it off.”

Another, Councillor Chris Steven, said: “Calm down, it’s a dramatisation, not a factual re-telling of the 1980’s.

“It’s not going to change the reason so many rightly adore the Queen.”

Kerrie added: “They never claimed to be a documentary.

“Anyhow, your Gramps came across rather well in the dramatisation, I thought.”

Another Twitter user, Archerslistener, added: “It’s a drama, not a documentary. And much of it is brilliant.”

The fourth season of the show focuses on the 1980s and portrays the relationship between the Queen and Prime Minister Margaret Thatcher, Princess Diana and Prince Charles’s early years and the heir to the throne’s affair with Camilla Parker Bowles.

Royal commentators have expressed their concerns over the latest instalment of The Crown, in particular for the damage it could do to the Duchess of Cornwall’s image.

Royal author Sally Bedell Smith told Vanity Fair: “People have come to regard her as a good egg, and to accept the idea of her being Queen Consort.

“Because viewers believe incorrectly that The Crown is true, this season in particular could undo all the good feelings about Charles and Camilla and resurrect the hostility from two decades ago.”

The Crown’s creator Peter Morgan has defended the use of creative license in the show after admitting he “made up” one of the key scenes in the first episode of the latest season of his show.

The scene he referred to shows Lord Louis Mountbatten writing a letter to Prince Charles in which he orders him to end his affair with Camilla and marry a “well-tempered girl”.

This letter is penned just minutes before Lord Mountbatten’s death, and reaches the Prince of Wales after the IRA’s deadly attack.

Mr Morgan said in the official podcast of the TV show: “What we know is that Mountbatten was really responsible for taking Charles to one side at precisely this point and saying, ‘Look, you know, enough already with playing the field, it’s time you got married and it’s time you provided an heir’.

“As the heir I think there was some concern that he should settle down, marry the appropriate person and get on with it.

“In my own head I thought that would have even greater impact on Charles if it were to come post-mortem, as it were.

“I think everything that’s in that letter which Mountbatten writes to Charles is what I really believe, based on everything I’ve read and people I’ve spoken to, that represents his view.