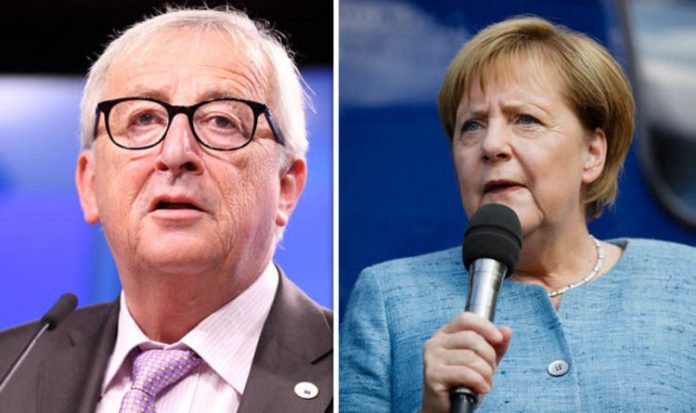 In an op-ed published on the Independent, Mr MacShane argues that, while Europe could be “overloaded” by the appointment of another German “middle-rank” politician in Brussels, a woman of the political stature of Mrs Merkel could be beneficial.

He said: “Might Angela Merkel herself seek to be the first woman president of the commission?

“She has the weight, the authority, the proven government record, international reputation and status, and more political experience and skills than all of today’s European politicians put together.”

According to Mr MacShane, who was Labour MP for Rotherham between 1994 and 2012, Mrs Merkel would be the best choice for the job.

The former MP believes Mrs Merkel is not only qualified because of her political sharpness, but also for the desire of reforming the EU she shares with French President Emmanuel Macron.

Such a close relations with Paris would only be beneficial to the bloc, Mr MacShane said, adding: “A deal with France’s President Macron could see a French central banker installed as president of the European Central Bank to reform the economic policy of the Eurozone in favour of growth and jobs with other key posts being allocated on regional, political and gender balance.”

The former MP also believes Mrs Merkel is already on the right mindset to lead the EU, despite still being the leader of Germany.

He added: “Merkel always says her last great challenge is to restore confidence in and purpose to the European Union.

“She is the one German who could lead post-Brexit Europe and make presidents Trump, Putin and Xi sit up and realise the EU is now getting serious.”

Mr MacShane’s support for Mrs Merkel comes after rumours the German Chancellor is plotting to replace Mr Juncker with a top-role politician from Berlin emerged.

A high-ranking government official told German newspaper Handelsblatt last week: “The ECB is not the top priority for Merkel, but the EU Commission.”

And a German MEP and a close ally of Mrs Merkel told Politico: “It’s certainly plausible that Germany has an interest because it has not held the Commission president post since Walter Hallstein in 1967.”

Manfred Weber, leader of the conservative People’s Party in the European Parliament, has been touted as a potential candidate for a top role in Brussels.

Another name on the cards is Peter Altmaier, a long-time ally of Mrs Merkel and current German minister for economic affairs and energy.

Mr Juncker’s five-year mandate is set to end next year.