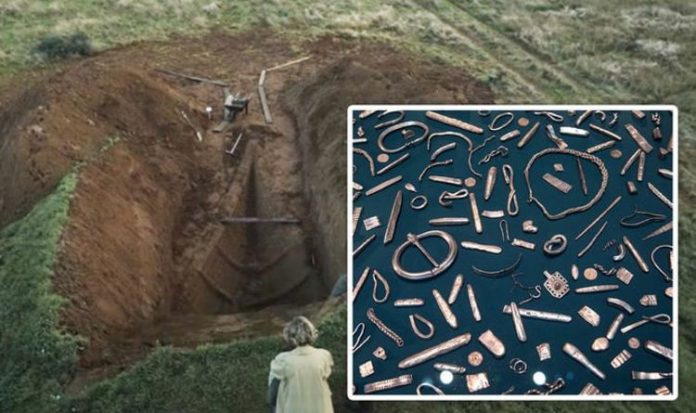 Netflix will release its new film ‘The Dig’ in January, depicting the events that unfolded after the excavation of Sutton Hoo. The site, near Woodbridge, Suffolk, was at the centre of an extraordinary find when an ancient burial was uncovered on the property of Edith Pretty. Archaeologists discovered two early medieval cemeteries that dated from the sixth to seventh centuries and have been excavating the area ever since.

The incredible treasures were revealed during the BBC’s ‘Masterpieces of the British Museum’ documentary.

The narrator said: “Bloomsbury in central London is home to one of the country’s most famous national institutions.

“Established in 1753, the British Museum is one of the oldest museums in the world.

“Inside these walls, there are more than seven million objects spanning over two million years of global history and culture.

“At the top of these stairs is some of the greatest treasure ever found on English soil.

One of the cemeteries had an undisturbed ship burial with a wealth of Anglo-Saxon artefacts.

Items found in the burial chamber included a ceremonial helmet, a shield and sword, a lyre, and a silver plate from the Byzantine Empire.

The series explained how Mrs Pretty played a key role in the discovery.

“She had been to Egypt and also there were rumours of gold in the mounds.

“She knew a bit about archaeology and I think really her curiosity was tickled.

“She was wealthy enough to open them and have a look – so she did.”

The site has become central to understanding the Anglo-Saxon history of the region and scholars now believe King Raedwald of East Anglia is buried in the ship.

It is considered one of the best British treasures ever discovered and at the time was worth around £50,000, or £3.3million today.

The new Netflix release is directed by Simon Stone and based on the 2007 novel of the same name by John Preston.