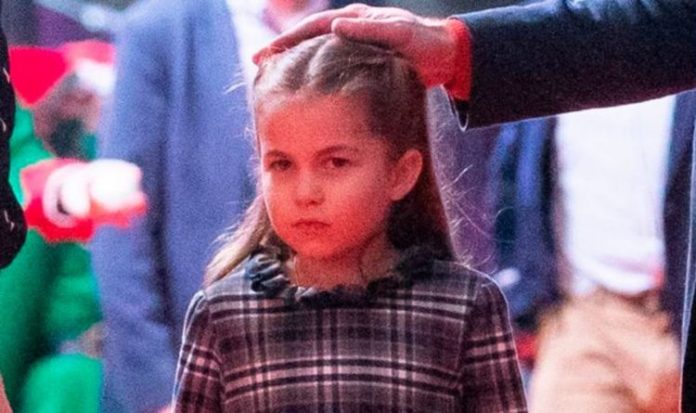 Princess Charlotte has appeared more and more alongside her parents Prince William and Kate, the Duchess of Cambridge on public outings over the past year. Last week, the young princess attended a pantomime with the rest of the Cambridge family in central London, showing signs she does not need any support from her parents to handle the attention. Royal expert Chris Ship noted Charlotte showed she “can do it” as she repeatedly snubbed Prince William’s offers of support.

The ITV’s Royal Rota host said: “We were noticing there’s a bit where William had held Charlotte’s hand because she was a bit nervous at first.

The pantomime marked the first red carpet event all three Cambridge children attended with their parents, as Prince Louis made his debut outside Trooping the Colour.

Video from the outing showed Princess Charlotte flanked by Kate and Prince William as both of her brothers held hands with one of their parents.

While George and Louis kept holding on to the Duke and Duchess of Cambridge, Charlotte was seen walking by herself after repeatedly refusing to take back her dad’s hand.

The young Cambridge princess has won over the public with her cheeky grins and tendency to stick out her tongue at photographers during public events.

Less shy than her older brother, Prince George, Charlotte has repeatedly been compared to her great-aunt, Princess Anne.

Charlotte is expected to follow in Anne’s footsteps to support her big brother in his path to become king years down the line.

Despite the different roles they will one day hold, Charlotte and George are not expected to be treated any different by Kate and William.

Expert Victoria Murphy said in November: “I don’t think William and Kate will separate the way they treat them, I think they’ll be brought up in exactly the same way.

“But of course, they are going to be told at some point that these are your future roles and George will be told one day you will be King, and Charlotte will be told you won’t be.

“And of course, as George goes on to have children, she will be knocked further and further down the line of succession.

“But I think that does give her more freedom, because in an age where opportunities are unlimited for women, as they are for men, she can really do whatever she wants.”