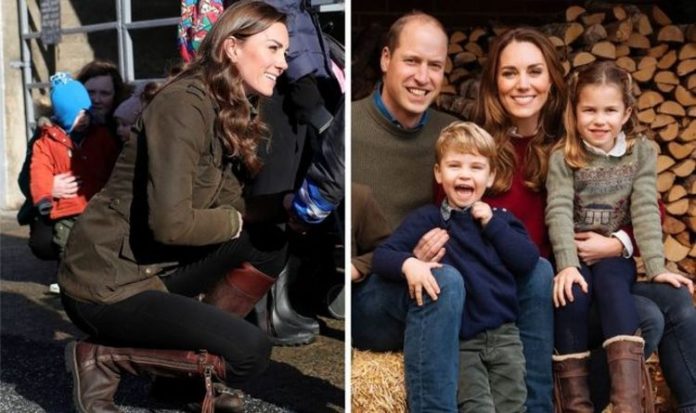 The Duke and Duchess of Cambridge shared their annual Christmas card photo earlier this week, which shows the family of five sitting on a block of hay. The three children, Prince George, seven, Princess Charlotte, five, and Prince Louis, two, steal the show as they beam into the camera

She has her hair swept back in two split ponytails.

But her brown boots are of most interest, as they bare a striking similarity to a pair Kate is often seen wearing.

Charlotte’s one-of-a-kind boots were made especially for the royal youngster by Penelope Chilvers, the designer who created Kate’s brown knee-high tassel boot which she has been seen wearing for almost two decades.

The Duchess first purchased the pair of brown boots when she was a student at St Andrew’s University, just before she first started dating Prince William.

Kate has worn the £514 ($695) boots for several photo opportunities, including a shoot at Blenheim Palace in 2004.

She also took them on her royal tour to India and Bhutan with Prince William in April 2016.

More recently, the Duchess wore them to visit The Ark Open Farm in Newtownards, Northern Ireland to promote her early year’s project.

Royal Christmas cards have become an annual tradition, with each family member issuing a favourite photograph to mark the passing year.

The family of five sit in front of a stack of firewood as they all group together wearing autumnal colours.

Prince Charles and Camilla, Duchess of Cornwall, have also released the image on their Christmas card.

The pair posed for their photograph at their home in Birchall, Aberdeenshire.

The sunny photograph shows Charles looking fondly at Camilla, as they sit on a backdrop of stunning flowers in full bloom.

Meghan Markle and Prince Harry are expected to release their photograph in the coming days.