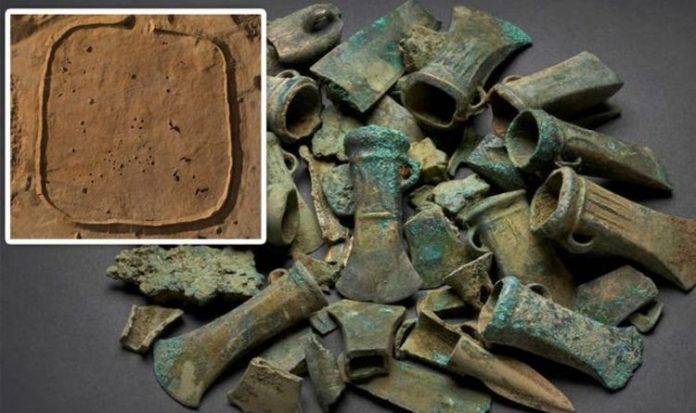 Harry Platts found a 3,000-year-old axe which led to the discovery of 453 artefacts on a site on the northern edge of the Thames in Rainham.The plot, overseen by Historic England, had been identified as an area of interest since the Sixties through aerial photographs and the haul, dating between 800BC and 900BC became known as the ‘Havering Hoard’. Mr Platts’ “once in a lifetime” find came just four weeks into the university graduate’s new job.

The 23-year-old former archaeology student at University College London was on a six-week temporary contract for Archaeological Solutions when he struck gold.

He said: “I was wrapping up for the weekend and I saw this patch of green on the edge of my section.

“I thought it might be a stone or something but then it started to look very much like an axe.

“I literally called everyone over and we all stared at it. And then more patches of green began to emerge around it. It was mad.”

Mr Platts, who is now studying for a masters in medieval archaeology at York University, added in an interview with the Evening Standard: “I did about five hours of overtime that night.

“I had everything in to make myself a roast dinner when I got home from work.

“I still made it at 10pm when I got home and had a few beers to celebrate.

“Some archaeologists don’t have a discovery like that throughout their career.

READ MORE: ‘Never seen anything like it!’ Archaeologist astounded by incredible discovery in Egypt

Duncan Wilson, chief executive of Historic England, said in 2018: “The finds have already taught us a great deal about this distant age, and ongoing analysis and public outreach means that many more people will benefit from this window into the past thanks to this example of successful development-led archaeology.”

That same year, a coroner officially declared the find as treasure.

The court heard that the land is being developed and, as part of planning permission requirements, archaeologists were brought in to investigate a “crop circle” on the site.