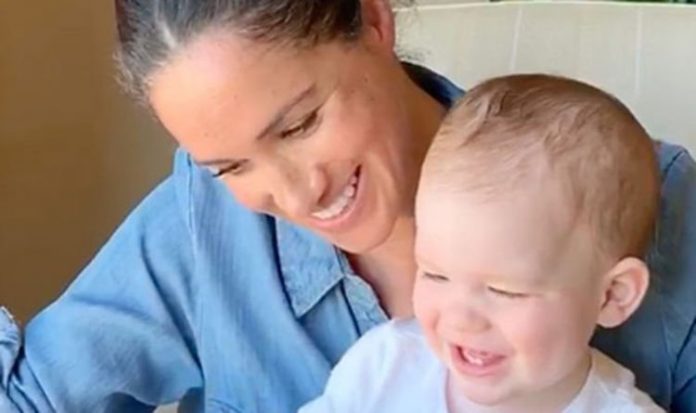 Meghan Markle and Prince Harry have released the first episode of their highly-anticipated podcast series from Archewell Audio. The holiday special, which features Elton John, Tyler Perry and James Corden, among others, follows the couple’s Spotify deal, understood to be worth around £30m. Towards the end of the episode, the pair’s son Archie can be heard speaking publicly for the first time.

The moment came as the gospel song This Little Light of Mine played out the episode.

The song was also heard at the end of Harry and Meghan’s wedding in May 2018.

Before it played, Meghan explained, quoting Martin Luther King: “It was the music that we wanted playing when we started our lives together.

“Because as we all know, ‘darkness cannot drive out darkness, only light can do that’.”

JUST IN: Meghan and Harry drop first podcast episode with star-studded line up

Harry continued, “The message of this song is one we hold so dearly.

“It’s about using the power we each have within us to make this world a better place.”

Harry then adds: “Happy New Year, everyone. Stay safe out there.”

Meghan echoes this: “Happy New Year! Thanks for listening.”

The family of three can then be heard giggling and laughing aloud as the podcast ends.

During the podcast, the Duchess also subtly nodded to the year of controversy surrounding her young family following their departure from their royal duties.

She told listeners: “I’ll say no matter what life throws at you guys, trust us when we say, love wins.”