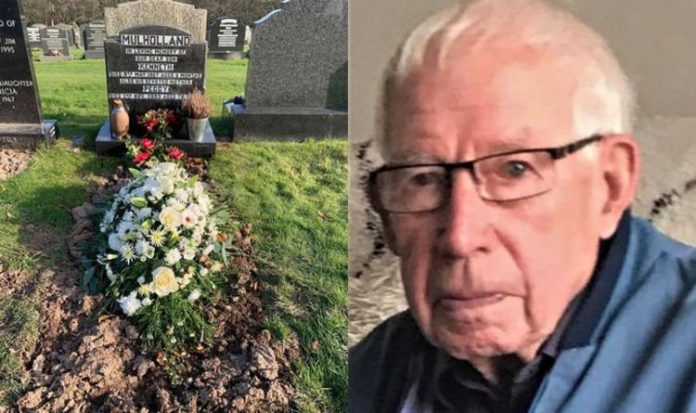 Campbell Mulholland died on February 2 and expected to be buried with his baby son and wife Peggy. But the local council has refused his plan because the grave is too small by half an inch. Campbell Mulholland had paid for his funeral nine years earlier but his niece Donna Cole was told 24 hours before the funeral he was not allowed to be placed in the family plot in Clandeboye Cemetery.

“I couldn’t believe what we were hearing. My uncle was a man of absolute integrity, he looked after his friends and family, worked as a milkman all his days and asked nothing of anyone.

“He was devoted to his wife Peggy and together they bought a family plot when their son Kenneth tragically died aged just five months in 1967. It must just have broken their hearts.

“When Peggy died in 2003, she was buried in the family plot with Kenneth, and Campbell expected to be with them one day. So to think of him now separated from them is indescribable.

“Campbell kept Peggy’s slippers by their bed from the day she died, her perfumes and all her little bits and bobs remained in place in their bedroom for the last 18 years.

“He got comfort from the fact they’d be buried together but now he’s not allowed to be anywhere near her or their son. He’s lying alone in a coffin in a morgue. It’s undignified, unfair and unnecessary.”

Donna said: “Clarke’s Funeral service offered to try to get a coffin that measures 11.5 inches with the hope that my uncle would fit in it. But the council says it would have to be 11 inches to stay within the rules, meaning we’re fighting over half an inch of space.

“The funeral home asked for an extra half inch to be dug out of the grave and left on top of the grave to settle but the council won’t hear of it. My uncle’s wishes, intentions and the contract he had for burial have all been ignored.

“He paid for his funeral in full in 2012, 20 years after the new regulations and no one told him that there was a chance he’d be barred from his own grave.

“Where has humanity gone in Northern Ireland? What has happened that an old gentleman cannot be buried in his grave with his wife and baby for the sake of half an inch of soil? It’s heartbreaking.

“My uncle paid in full for his own funeral service including everything from the flowers to the orders of service. He liked order and good sense and in the final moment of his life on this earth he has been subjected to disorder and very poor decisions.

“My uncle was taken back to the morgue after his funeral service and remains there unburied and alone.”

A spokeswoman for Ards and North Down said: “All councils in Northern Ireland are bound by the Burial Ground Regulations (Northern Ireland) 1992, which detail strict guidance in terms of the functions of a council in relation to its burial grounds.

“Regrettably, by law we do not have any leeway around this legislation and as such must abide by these Regulations.

According to Co Down MLA Alex Easton this heart-breaking situation is not unusual.

He said: “If this can happen to one family it can happen to many others. Graves and burials are a vitally important aspect of life in Northern Ireland and this sort of situation is appalling.

“I’m horrified and deeply angry to discover people who’ve bought grave plots are now discovering in some cases they can’t use the grave.

“Despite Mr Mulholland’s plot and funeral being prearranged and prepaid, his family had to cancel the burial and are now being forced to buy a new grave plot or change to a cremation.

“This is an utter scandal. The council should tell anyone who bought a grave before 1992 about the legislation – not inform families the day before a burial causing shock, hurt and anger.

“The council needs to apologise to the families and sort this scandal out.”