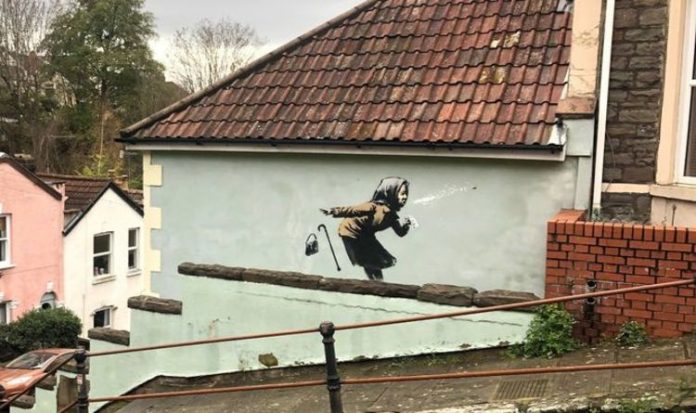 Entitled “Aachoo!!” it appeared on the side of a semi-detached house in Totterdown and shows an old woman sneezing out her false teeth while losing her bag and stick. The stencilled mural is in Vale Street – England’s steepest road.

First seen yesterday morning, there was speculation whether or not the piece belonged to the mysterious artist.

Confirming its authenticity, Banksy – famed for satirising corporations, politicians and those in positions of power – yesterday released a photo of it on his official website and Instagram account.

In the picture, a wheelie bin next door is on its side, and a man holding an umbrella is being blown backwards.

Furniture maker Fred Loosmore, 28, rented a room in the house until recently. He returned to screw clear acrylic over the work to protect it.

“We wanted to come up because people will deface it,” he said. “It’s so relevant, isn’t it?”