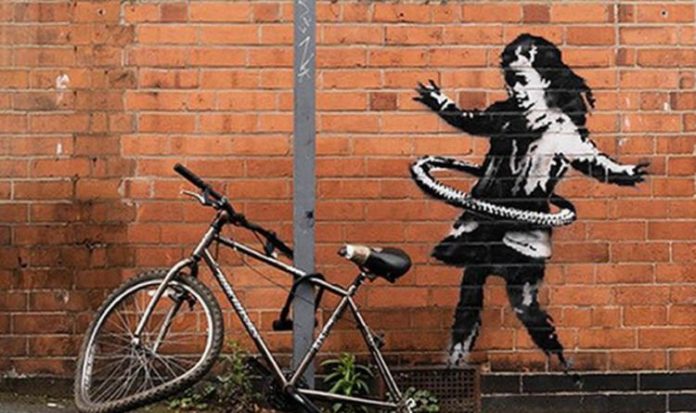 Banksy has posted a picture of the work on his Instagram account, ending speculation over whether he was behind it.

The piece appeared on a wall on Tuesday in Lenton and sits just behind a battered bike chained to a lamppost. The bike is missing a tyre, which the girl is using as a hoop.

Surinder Kaur, 42, who runs the AVI beauty salon next to the artwork, confirmed the bike had appeared at the same time as the mural.

She said that the council acted swiftly to protect the piece by placing clear plastic sheeting over it. Vandals have since sprayed over the plastic two or three times.

Ms Kaur said: “Everyone is very excited and many people are coming to see it. Everyone had been confused about whether it was real but it’s amazing – amazing art.”

Antonia Gardner, 48, lives nearby and took her daughter Alexis, eight, to see it.

Antonia said: “Having the Banksy confirmed as genuine has given us a much-needed boost – it’s amazing and Alexis loved it too.”