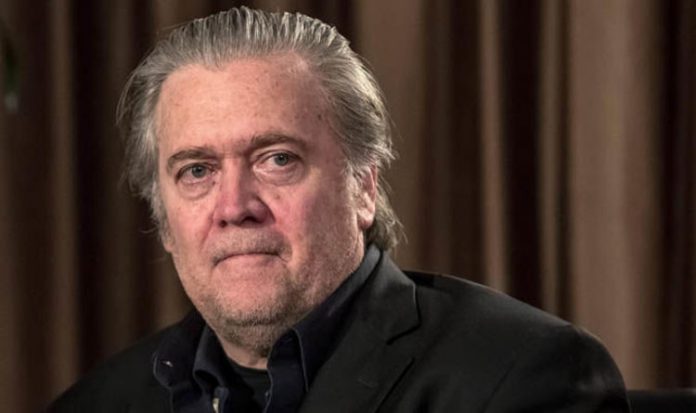 Steve Bannon has set up “The Movement” in Brussels, along with Raheem Kassam, Nigel Farage’s former adviser.

Ten people have been hired ahead of the group’s launch in September when Bannon will present himself as executive chairman. Vice chairman Kassam describes his boss as ‘The Godfather’. Elections for the European Parliament take place in the spring.

Although critics suspect the duo are only targeting far-Right parties, including France’s Front National, Germany’s AfD and Spain’s Vox, Mr Kassam insisted they want to reach out to right, left and centre parties.

Speaking from Washington, where he has been meeting Mr Bannon, Mr Kassam said: “The level of interest on the Continent is immense. It is moving at a pace I can’t even keep up with at the moment – and I am the one running the nuts and bolts of it every day.”

He said The Movement is a non-government organisation, not a political party. It will not put up candidates in the elections.

He said: “We are not yet in a position to announce who the partners will be.

“We are still in conversations with these people as to whether it is a formal structure or an informal relationship.

“We are in the process of building detailed information from polls and other data, focusing on the biggest countries in the EU.

“What must be stressed is that we are not going into countries telling them what to think, how to campaign or what issues to campaign on.

“All you have to do to be part of The Movement is to believe in nation state sovereignty.”

He said the prime intent was to encourage political parties to stop the European Commission pushing through laws which take sovereignty away from member states.

However, there were signs yesterday the plans were not going quite to plan.

Joint leader Alexander Gauland said: “The interests of the anti-establishment parties in Europe are quite divergent.”

However, Mr Kassam said: “We’ll work with anyone, as long as they believe Brussels has gone too far in taking control away from national parliaments and want to see all those powers repatriated.”