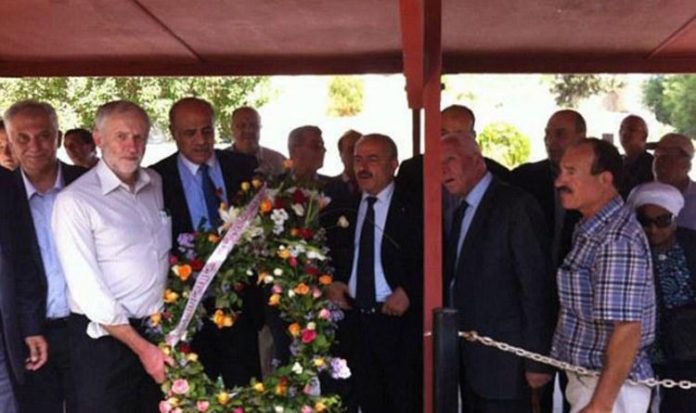 The Home Secretary ratcheted up the pressure on Mr Corbyn after a photo emerged of the Labour leader holding a wreath near the burial spot of ‘Black September’ henchmen who massacred Israeli athletes at the 1972 Munich Olympics.

Mr Corbyn claimed he was paying his respects to victims of a 1985 Israeli airstrike on PLO offices in Tunis.

But the Daily Mail reports that the photo shows him 15 yards away from a plaque honouring the founder of Black September.

Posting a photo of the article, Mr Javid tweeted: “If this was the leader of any other major political party, he or she would be gone by now.”

Chair of Jewish Leadership Council, Jonathan Goldstein, told the Jewish News: “This man is not fit to be a Member of Parliament, let alone a national leader.

“He has spent his entire political career cavorting with conspiracy theorists, terrorists and revolutionaries who seek to undo all the good for which our ancestors have given their lives.

“In so many ways, enough is enough”.

Labour sources have claimed Mr Corbyn gave a full explanation of his trip to the cemetery when the Tunis visit first hit the headlines during last year’s general election campaign.

“And I was accompanied by very many other people who were at a conference searching for peace.”

It comes as the ongoing anti-Semitism scandal threatens to rip the Labour Party apart.

Mr Corbyn’s party has faced a barrage of criticism over its refusal to adopt all 11 of the International Holocaust Remembrance Alliance’s (IHRA) anti-semitism definitions.

This weekend, it emerged that three of Labours main trade-union backers – Unite, Unison and the GMB – had hired lawyers to examine the legal definitions of anti-semitism and demand Mr Corbyn and Labour capitulates.

A motion to accept the full IHRA definitions is set to be submitted to Labour’s ruling National Executive Committee next month.

Meanwhile, three senior union leaders – from the GMB, Unison and Usdaw – have added their voices to calls from deputy leader Tom Watson for the full IHRA text to be incorporated into Labour’s new code of conduct on anti-Semitism.

It came after similar calls from Unison leader Dave Prentis and Tim Roache, general secretary of the GMB.

Labour has launched a consultation with Jewish groups over the code, after protests that party’s version omits four examples around criticism of the state of Israel.

A Labour Party spokesman said: “The code of conduct adopts the IHRA definition and expands on and contextualises its examples to produce robust, legally sound guidelines that a political party can apply to disciplinary cases.”

Writing in the Sunday Mirror, shadow chancellor John McDonnell said: “Both Jeremy Corbyn and I have made clear that racism and anti-Semitism have no place in the Labour Party.

“Labour will resolve any outstanding issues within our party and get out there to assist the Jewish community in fighting anti-Semitism and racism.”