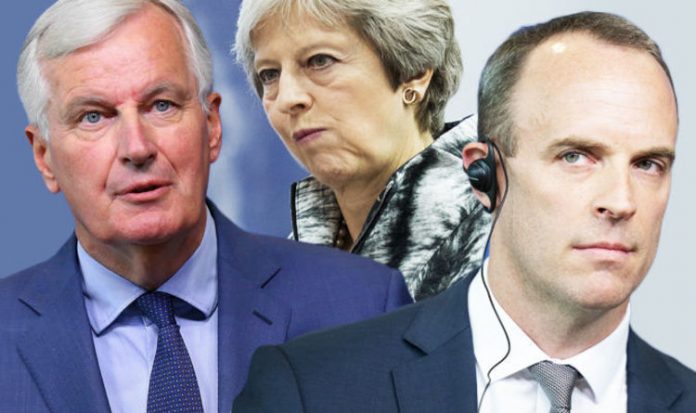 The EU’s chief negotiator warned Britain it can’t “cherry pick” which Brussels regulations it wants to adopt on exiting the bloc.

The Brussels bigwig told German newspaper Frankfurter Allgemeine Zeitung that the British “have a choice”.

Mr Barnier said: “They could stay in the single market, like Norway, which is also not a member of the EU, but they would then have to accept all the regulations and make contributions to European solidarity.

“But if we let the British cherrypick which of our regulations to follow, that would have serious consequence: all sorts of other third countries could insist that we offer them the same deal.

“That would be the end of the single market and the European project!

“I am often accused of being dogmatic in the UK, but the truth is I’m only protecting our fundamental interests.”

It would be “much easier” if Britain stayed in the Customs Union, he added.

The Prime Minister’s Chequers blueprint led to the resignations of then Foreign Secretary Boris Johnson and Brexit Secretary David Davis in July.

Disillusioned eurosceptics have threatened to boo Mrs May when she addresses the autumn Tory Party conference.

Mrs May launched a robust defence of her Chequers proposal over the weekend, vowing there would be “no compromises”.

She also promised she would not allow a second Brexit referendum.

Writing in the Daily Telegraph, Mrs May said: “I will not be pushed into accepting compromises on the Chequers proposals that are not in our national interest.

“Neither will I give in to those who want to re-open the whole question with a second referendum. To ask the question all over again would be a gross betrayal of our democracy – and a betrayal of that trust.

“To ask the question all over again would be a gross betrayal of our democracy – and a betrayal of that trust.”

She added: “There is still a lot more negotiating to be done.

“So it is only responsible that we have also spent time this summer preparing for a no-deal scenario, just as the EU have done too.”