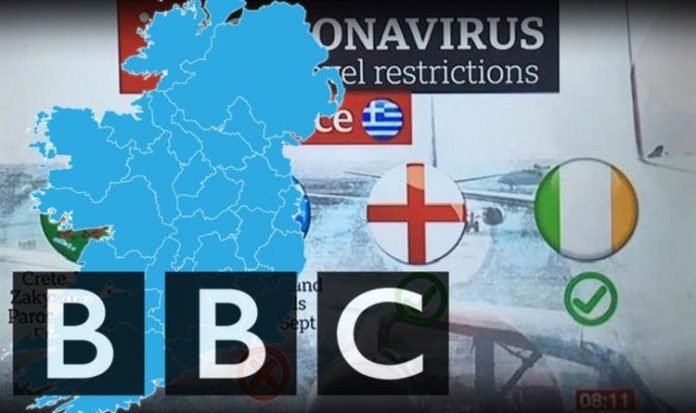 During a news segment this morning, the BBC reported on the UK travel restrictions caused by the ongoing coronavirus pandemic. Four graphics of maps were shown to represent England, Scotland, Wales and Northern Ireland.

However, the corporation was ridiculed after using a map of the Republic of Ireland to represent Northern Ireland, despite them being two completely different entities.

Another view tweeted: “The sheer ignorance of it.

“This is supposed to be a quality television station.”

Someone else said: “How on either was this broadcast without anyone spotting that?”

Another viewer revealed they have filed a complaint to the BBC over the matter and said: “Already submitted a complaint.

“Be good to have a lot more. Takes minutes on the BBC website (You don’t have to have watched the programme).”

And another person described it as “scandalous” and demanded an apology.

“In a graphic sequence explaining the differing travel quarantine rules around the nations of the UK we mistakenly showed the wrong flag for Northern Ireland.”

The DUP leader tweeted: “At least ITV’s [Good Morning Britain] were able to get the right flag for a similar graph.

“BBC Breakfast were right to apologise, but the BBC DG needs to investigate the editorial process that allowed the inaccurate graphic to air. Very poor.”

Flags have long been a contentious issue in Northern Ireland, with the decision in 2012 to stop flying the Union Flag daily at Belfast City Hall sparked months of protests.

The only official flag of Northern Ireland is the Union Flag of the United Kingdom.

This error comes just hours after Mr Davie vowed to regain the trust of the British public after months of backlash.

Addressing BBC staff in Cardiff yesterday, he said: “The evidence is unequivocal: the future of a universal BBC can no longer be taken for granted.

“We have no inalienable right to exist.

“We are only as good as the value we deliver our audiences, our customers.

“We must grow that value. That is our simple mission.”