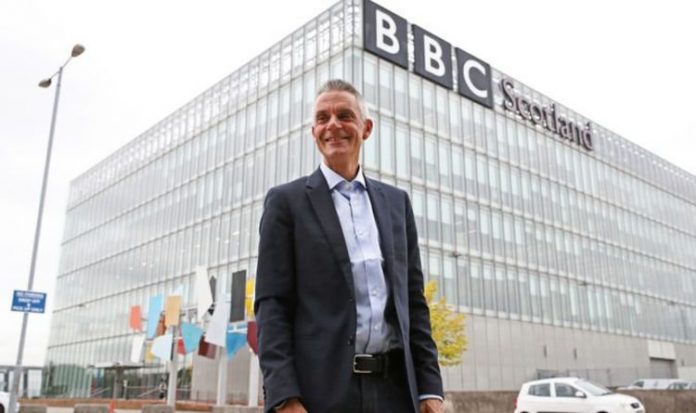 New BBC director-general Tim Davie made the stark warning to staff today in his first speech in the role. Taking over the reins of the organisation from Tony Hall earlier this week, Mr Davie has vowed to restore faith in the BBC following months of backlash.

During a speech in Cardiff today, he said: “If you want to be an opinionated columnist or a partisan campaigner on social media then that is a valid choice, but you should not be working at the BBC.

“Also, we need to explore new ways of delivering impartiality.

“Seeking a wider spectrum of views, pushing out beyond traditional political delineations and finding new voices from across the nation.

“We have begun this work but we can go further.

“I want staff to spend much more time outside the BBC listening to those who pay for us.”

Mr Davie also announced he wants a “radical shift” in the focus of the BBC as it attempts to reconnect with viewers who feel alienated by the corporation.

“I would just turn to our finest work: it is exhilarating, passionate and ground-breaking.”

The new director-general added there is no room for complacency in the future and said the BBC’s future was at stake.

He added: “The evidence is unequivocal: the future of a universal BBC can no longer be taken for granted.

“We have no inalienable right to exist.

“We are only as good as the value we deliver our audiences, our customers.

“We must grow that value. That is our simple mission.”

The BBC has faced scrutiny over equal pay and diversity with an Ofcom report last year revealing it is seen as too white, middle class and London-centric.

After announcing plans to scrap free TV licences for most over-75s, the BBC faced backlash from the public and the government.

Mr Davie previously seemed open to the idea of a subscription service, like Netflix, as calls erupt to defund the BBC.

In his first speech in his role, Mr Davie said a subscription service would make them “another media company serving a specific group”.

He said: “For the avoidance of doubt, I do not want a subscription BBC that serves the few.

“We could make a decent business out of it, and I suspect it could do quite well in certain postcodes, but it would make us just another media company serving a specific group.

“The UK’s creative industries have been a global economic success because of a rather enlightened blend of the free market and smart universal interventions like the BBC, and our landmark museums … open to all.

“It is a brilliant national success that future generations deserve to benefit from.”