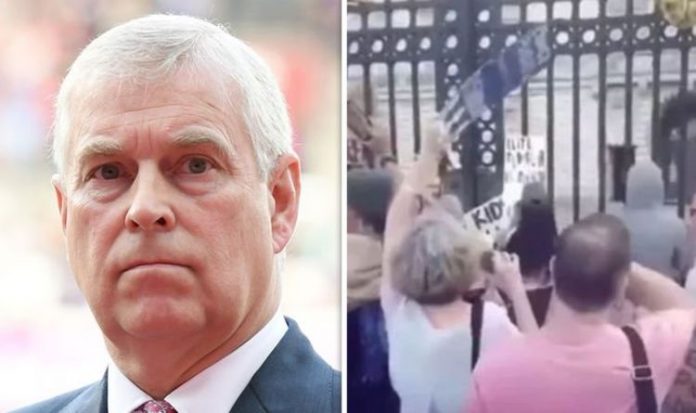 Footage of angry demonstrators chanting “paedophile” outside the Palace gates has been viewed by millions of people online. Numerous people held placards that called for an end to child trafficking, during the Freedom For The Children Global Walk London, amid reports child trafficking has actually increased during the coronavirus crisis. The astonishing video circulating online clearly shows how the issue of the Duke of York’s friendship with the late Epstein is not going away.

Andrew has also been accused of having sex with Virginia Roberts Giuffre, who claims to be a trafficking victim of Epstein, on three occasions when she was 17 years old.

However, the Duke vehemently denies this allegation.

Buckingham Palace said in a statement: “It is emphatically denied that The Duke of York had any form of sexual contact or relationship with Virginia Roberts.

“Any claim to the contrary is false and without foundation.”

Ms Giuffre recently spoke out again ahead of a new documentary, saying that she is running out of hope, because Andrew has still not spoken to the FBI.

US prosecutors have claimed the Duke is not cooperating with their investigation, while Andrew’s team claim he has offered to cooperate three times this year.

Meanwhile, Andrew’s long-time friend Ghislaine Maxwell, who was the one who introduced him to Epstein, has been arrested and is awaiting trial on sex trafficking charges, as well as perjury charges.

Royal commentators have argued that the image of protestors outside Buckingham Palace is an incredibly bad look for the Royal Family, because it shows that the Palace.

Mr Myers said: “Now, people at the Palace I’ve spoken to have confirmed that this did in fact take place, but there hasn’t been any comment from them.

“I think that there were similar protests in London and Manchester speaks volumes, but just the sight of people outside waving placards, shouting things about ‘paedophiles’ outside the gates of Buckingham Palace is very very powerful and concerning for the palaces.”

Ms Gripper added: “The footage has been viewed three million times around the world and brought awareness to a cause that – well, we would all agree that stopping child trafficking is a good cause to be campaigning for.

“And it’s just difficult for the Palace, they are now associated with that issue and it’s not going away is the problem.”

The protesters wanted to draw attention to the issue of child trafficking, which has gone up during the COVID-19 pandemic.

What’s more, so much money has been diverted towards fighting the virus that there are other forms of protection that are reportedly being neglected.

This protest, combined with the latest comments from Ms Giuffre has kept Prince Andrew’s name in the news as the saga over his relationship with Jeffrey Epstein rumbles on.

One detail from Ms Giuffre’s claims was her assertion that Andrew had compared her to his daughters Princess Beatrice and Princess Eugenie.

She claimed that Ms Maxwell asked Andrew to guess her age, and when it was revealed she was 17, he allegedly commented that she was not much older than his daughters.

Mr Myers added that all this is heaping “more and more pressure” on Andrew to speak to the FBI.

Mr Myers said: “This is all painting a very unsavoury picture at the moment.

“And, regardless of whether Andrew or his team are consistently and constantly saying that ‘we are offering to speak to the FBI, we’re there to cooperate with the investigations’, the very fact that he hasn’t spoken to them is quite concerning.”

When contacted by Express.co.uk, Prince Andrew’s representatives declined to comment.